Refusal to deliver F-35 jets would be 'robbery', says Erdogan

Turkey had already paid USD 1.4 billion, while its defence industry has ploughed significant sums into the warplanes' production. 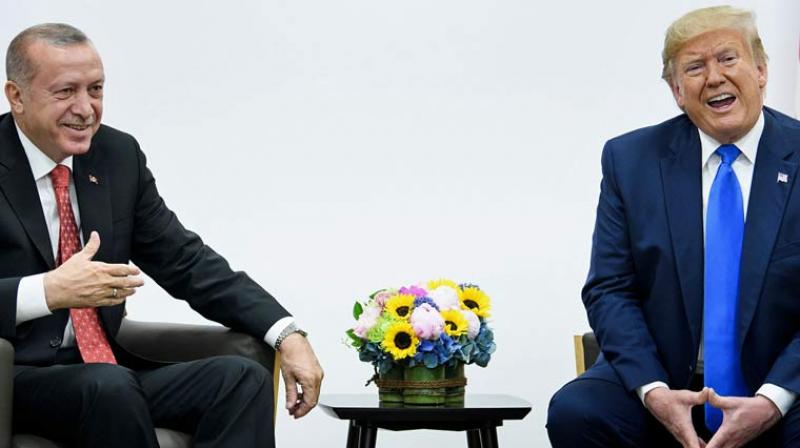 "If you seek a customer, and a customer comes forward and makes payments like clockwork, how can you not give that customer their goods? This would be robbery," says Erdogan (Photo: AFP)

Ankara: President of Turkey Recep Tayyip Erdogan said it would be "robbery" by the United States to deny Turkey the F-35 fighter jets it has bought, according to comments published on Thursday.

Turkey-US ties are under serious strain over Ankara's purchase of the Russian S-400 air defence system, which is due for delivery in the coming days. In response, Washington has threatened to cancel Turkey's order of 116 F-35 fighter jets and kick it off the training and production programme, as well as wider economic sanctions.

"If you seek a customer, and a customer comes forward and makes payments like clockwork, how can you not give that customer their goods? This would be robbery," Erdogan was quoted as saying by Hurriyet daily. He said Turkey had already paid USD 1.4 billion, while its defence industry has ploughed significant sums into the warplanes' production.

The acting US defence secretary, Patrick Shanahan, wrote a letter to Ankara last month, warning that Turkish pilots would be expelled from the US if the S-400 deal was not cancelled by July 31.

But after meeting his US counterpart Donald Trump on the sidelines of the G20 summit in Japan on Saturday, Erdogan said he had been assured there would be no sanctions.

Trump blamed the previous adminstration of Barack Obama for failing to finalise a deal for Turkey to buy the American Patriot system instead of the S-400. Turkey previously said Russia offered a better deal including joint production.

In his latest comments, Erdogan said Trump's attitude was "praiseworthy".