Merkel urged the fellow students to reject isolationism and nationalism, embrace the fight against climate change. 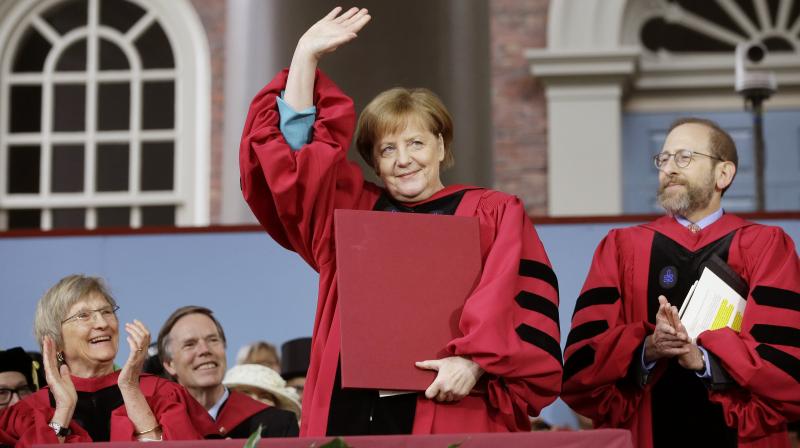 'I experienced firsthand how nothing has to stay the way it is,' she said. (Photo:AP)

Speaking to Harvard's 2019 graduating class during the 368th Commencement exercises at the University, Merkel urged the fellow students to reject isolationism and nationalism, embrace the fight against climate change, see the world through other's eyes and never describe "lies as truth and truth as lies", The New York Times reported.

Merkel, 64, who spoke mostly in German with a consecutive English translation, began by telling the crowd that how, as a young physicist in East Berlin during the Cold War period, she walked home every day, frustrated and despondent that the Berlin wall dividing the city had limited her life.

But the Chancellor, who has said she will leave politics in 2021, noted that things changed after the wall came down in 1989.

"I experienced firsthand how nothing has to stay the way it is," she said.

"This experience, dear graduates, is the first thought I wish to share with you: Anything that seems set in stone or inalterable can indeed change," Merkel was quoted as saying.

Merkel, who is one of Europe's longest-serving leaders, never mentioned President Donald Trump by name, but criticised his decision to withdraw the United States from the Paris climate accord, his criticism of the European Union and NATO, and complaints about what he views as unfair trade relations with Germany.

Merkel further asked the students to "tear down walls of ignorance" that feed nationalism and isolationism, and to remember that democracy "is not something we can take for granted."

The chancellor received a sustained standing ovation for her entreaties to respect others "and perhaps most important, be honest with ourselves."

She said, "What better place to begin to do so than here in this place," adding, where people come to learn "under the maxim of truth."