French President Macron said, 'You have to show you won't make little concessions, even symbolic ones'. 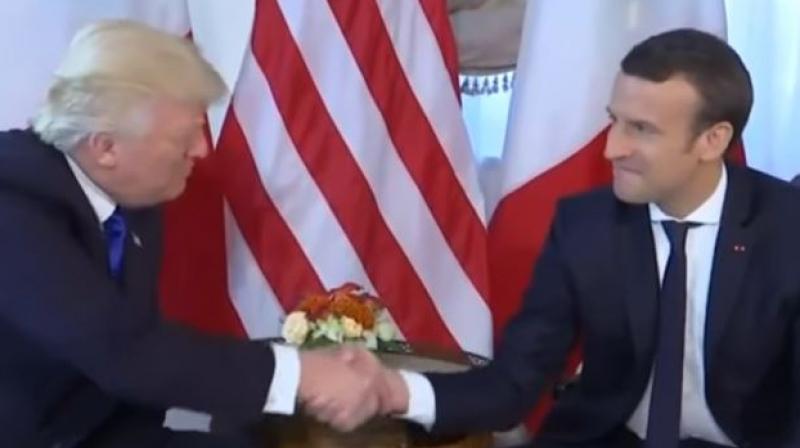 Macron held on tight to Trump's notorious power grip as the two men sat next to each other, the Frenchman's mouth clenched and eyes firmly fixed at the 70-year-old tycoon's squinty stare. (Photo: YouTube videograb)

Paris: France's new President Emmanuel Macron says he was ready for his "moment of truth" with US counterpart Donald Trump -- when they shook hands for the first time.

"You have to show you won't make little concessions, even symbolic ones," Macron, 39, told the French weekly Journal du Dimanche on Sunday.

Footage of the handshake as the pair met for lunch at the US embassy in Brussels ahead of a NATO summit on Thursday has gone viral.

As cameras rolled, Macron held on tight to Trump's notorious power grip as the two men sat next to each other, the Frenchman's mouth clenched and eyes firmly fixed at the 70-year-old tycoon's squinty stare.

After some five seconds, Trump was the first to open his hand but Macron insisted on being the last to let go.

"I don't miss a thing, that's how you get respect."

The French leader had another chance later in the day to be his own man, making a beeline for German Chancellor Angela Merkel to embrace her before turning to greet Trump -- who smilingly pumped and wrenched Macron's arm as other leaders laughed.

Macron said Trump and the Turkish and Russian presidents Recep Tayyip Erdogan and Vladimir Putin "think in terms of power ratios, which doesn't bother me".

But Macron, who became France's youngest president just three weeks ago, said he does not believe in "the diplomacy of public invective but in bilateral dialogue".

He faces his next diplomatic test on Monday when he will host Putin at the palace of Versailles outside Paris.