Iraqi family barred from flying to US, ‘treated like drug dealers’

Their passports confiscated, the distraught family was detained overnight at Cairo airport. 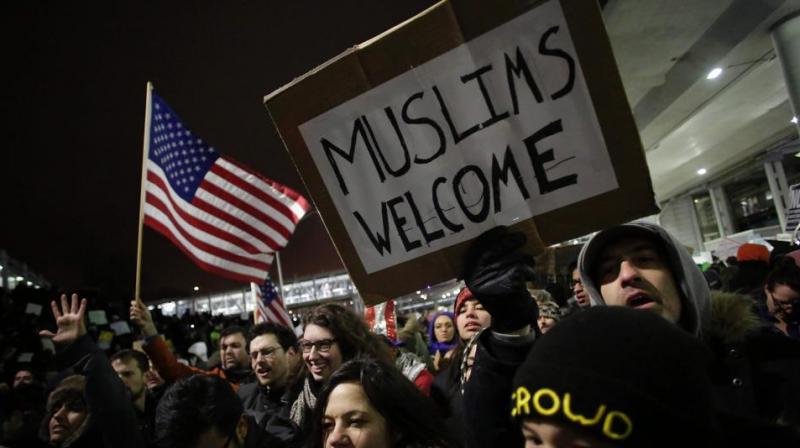 Cairo: Fuad Sharef and his family waited two years for a visa to settle in the United States, selling their home and quitting jobs and schools in Iraq before setting off on Saturday for a new life they saw as a reward for working with US organisations.

But Sharef, his wife and three children were prevented from boarding their connecting flight to New York from Cairo airport on Saturday. They were sudden victims of US President Donald Trump’s new travel ban on seven Muslim-majority countries.

Their passports confiscated, the distraught family was detained overnight at Cairo airport and forced to board a flight back to the northern Iraqi city of Erbil on Sunday morning.

“We were treated like drug dealers, escorted by deportation officers,” Sharef told Reuters by telephone from Cairo airport.

“I feel very guilty towards my wife and kids. I feel like I’m the reason behind their dismay.”

In the most sweeping use of his presidential powers since taking office a week ago, Trump signed an order on Friday suspending the entry of people from Iran, Iraq, Libya, Somalia, Sudan, Syria and Yemen for at least 90 days. He said this would help safeguard the United States from terrorists.

The travel curbs took effect immediately, wreaking havoc and confusion for would-be travellers with passports from the seven countries. Sharef and his family were among the first victims.

Sharef said he was employed by a pharmaceutical company before leaving Iraq, but had worked on projects funded by US organisations such as USAID in the years following the 2003 US-led invasion and occupation of Iraq.

The family applied for a US visa in September 2014 as security conditions in Iraq deteriorated, with Islamic State insurgents seizing swathes of the country and carrying out brutal killings.

Sharef’s work with the United States made him particularly vulnerable to attack by militants who view him as a traitor.

“I applied for immigration for several reasons. Firstly, I worked with Americans, which puts me at risk of threats from terrorist organisations. Secondly, I was interested in this (SIV) programme and my children’s interest to continue their education in the United States,” he said.

After risking their lives

Sharef applied to emigrate via a programme known as Special Immigrant Visa, which was created by US lawmakers to help the tens of thousands of Iraqis who risked their lives helping Americans after the 2003 invasion.

At least 7,000 Iraqis, many of them interpreters for the US military, have settled in the United States under SIV auspices since 2008, while some 500 more are being processed, State Department figures show.

Another 58,000 Iraqis have been awaiting interviews under the Direct Access Program for US-affiliated Iraqis, according to the International Refugee Assistance Project.

Sharef’s friend, Mona Fetouh, said she had worked with him on a USAID-funded local governance and civil society project in 2004. Fetouh, a US resident, said she gave Sharef a recommendation for his SIV application.

Originally due to fly on February 1, the family decided to travel earlier after news leaked of Trump’s plan to issue new immigration restrictions. But they were too late.

“The SIV process took two years and they were finally granted their visas and due to fly this week - bad timing,” Fetouh told Reuters. “They sold their home and possessions and quit their jobs and school in preparation for this move and are really devastated by this.”

Sharef, father to two girls and a boy, said the family was still in shock and did not know what steps to take next. They would be staying temporarily with Sharef’s brother in Erbil.

“I don’t know. Maybe I will send an email to the American embassy in Baghdad asking for an explanation,” he said.

Asked if he feared for his life returning to Iraq, he said, referring to the northern Iraqi city from which Islamic State is being gradually dislodged by an Iraqi army offensive:

“Maybe it’s less dangerous in light of the relative regression of Islamic State influence in Mosul, but during my years of work, my life and the lives of my family were constantly in danger and I’m now at risk of being a threat at any moment. There are no guarantees.”