Ukrainian President warns of threat of 'full-scale war' with Russia 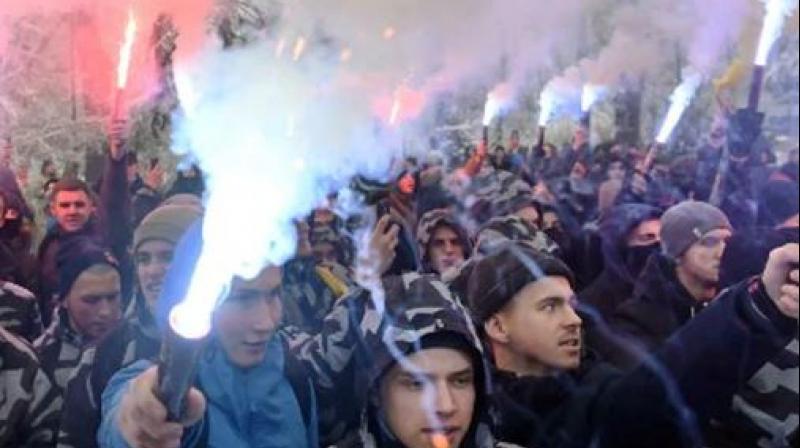 Activists hold flares during their rally in front of the Ukrainian parliament. (Photo: AFP)

Kiev: Ukrainian President Petro Poroshenko on Tuesday warned of the threat of "full-scale war" and said Russia had sharply increased its military presence on their shared border as tensions escalate between the ex-Soviet neighbours.

The crisis also threatened growing diplomatic fallout with US President Donald Trump warning that he may cancel a long-awaited summit with Russia's Vladimir Putin.

Trump is scheduled to meet Putin at the G20 summit in Buenos Aires at the end of this week, but he told The Washington Post that it would depend on the results of a report about the incident being prepared by his national security advisers.

In Ukraine, Poroshenko warned that the clash at sea could herald more drastic developments in the simmering Ukraine-Russia military standoff.

"I don't want anyone to think this is fun and games. Ukraine is under threat of full-scale war with Russia," the president said in an interview with national television.

He spoke after Russian forces seized three of Kiev's ships off the coast of Crimea on Sunday and captured 24 Ukrainian sailors.

On Tuesday, a court in Simferopol, the main city in Russian-annexed Crimea, ordered 12 of the sailors to be held in pre-trial detention for two months. Three hospitalised sailors were also formally detained for two months. The rest are to appear in court on Wednesday.

The move stoked already high tensions between Moscow and Kiev, as Russia continues to accuse the sailors of crossing illegally into Russian waters and of ignoring warnings from its border guards.

Kiev has demanded the release of the sailors and urged Western allies to impose further sanctions on Moscow.

The incident was the first major confrontation at sea in the long-running conflict pitting Ukraine against Moscow and Russian-backed separatists in the country's east.

It has raised fears of a wider escalation -- in a conflict that has killed more than 10,000 people since 2014 -- and prompted international calls for restraint.

Putin on Tuesday warned Ukraine against any "reckless acts" after Kiev declared martial law in response to Moscow's seizure of the navy vessels.

The Ukrainian parliament late on Monday voted in favour of Poroshenko's request for the introduction of martial law in border areas for 30 days.

This gives Ukrainian authorities the power to mobilise citizens with military experience, regulate the media and restrict public rallies in affected areas.

He said he hoped Berlin could intervene with Ukrainian authorities "to dissuade them from further reckless acts".

Moscow has accused Kiev of planning Sunday's confrontation as a provocation aimed at drumming up support for Poroshenko ahead of elections next year and convincing Western governments to impose further sanctions on Russia.

Putin said Kiev's actions were "clearly taken in view of the election campaign in Ukraine".

Sunday's incident has been playing out on Russian and Ukrainian television screens, with dramatic footage of Russian ships chasing down a Ukrainian tugboat that was trying to pass through the Kerch Strait from the Black Sea into the Sea of Azov.

Russian state television late on Monday aired footage of some of the captured sailors being questioned by Moscow's security services.

One of them is heard saying "the actions of the Ukrainian armed vessels in the Kerch Strait had a provocatory character" -- parroting the version of events put forward by Russian authorities.

"I know these sailors, they were always professional. What they are saying now is not true," he told Ukrainian media.

Western governments have rallied behind Kiev in the dispute, accusing Russia of illegally blocking access to the Sea of Azov and of taking military action without justification.

The foreign minister of Austria, which holds the rotating EU presidency, said Tuesday that the bloc will next month consider further sanctions against Moscow over the flare-up.

"Everything depends on the accounts of events and the actions of both sides. But it will need to be reviewed," Karin Kneissl told reporters.

UN chief Antonio Guterres on Tuesday called for "maximum restraint," urging both sides "to take steps without delay to contain this incident and reduce tensions".