'We are holding him upside down to show the lack of sense in his policies,' explained a Bizi activist called Mathieu. 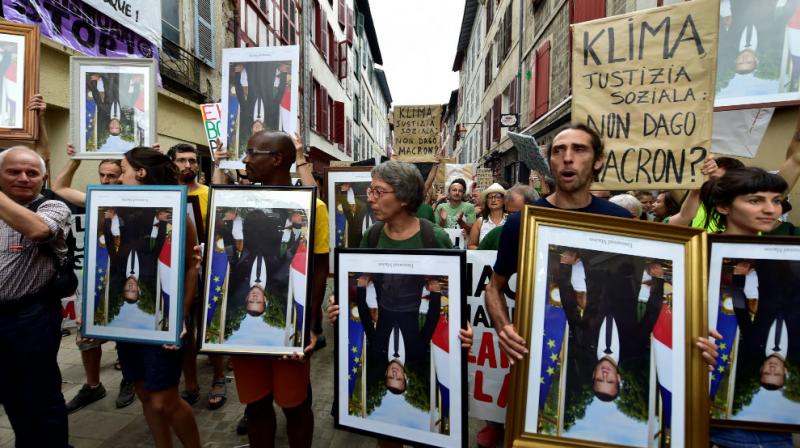 Demonstrators at the so-called "portrait march" were carrying official portraits of the 41-year-old French leader which had been taken down from town halls across the country over the last few months. (Photo: AFP)

Bayonne: Several hundred anti-G7 protesters staged an unusual protest in southwestern France on Sunday, holding "stolen" portraits of French President Emmanuel Macron which were held upside down in a pointed critique on his policies.

Demonstrators at the so-called "portrait march" were carrying official portraits of the 41-year-old French leader which had been taken down from town halls across the country over the last few months.

The climate and social justice march was organised by environmental activist group ANV COP 21, as well as two Basque groups Alternatiba et Bizi all of whom were marching under a slogan which pledged to "take down Macron".

"One, two, three degrees, it's a crime against humanity!" they chanted as they marched through the narrow streets of Bayonne near the southwestern French resort of Biarritz where world leaders are gathering for the G7 summit.

"We are holding him upside down to show the lack of sense in his policies," explained a Bizi activist called Mathieu.

Others also carried what appeared to be portraits wrapped up in bags or newspaper on which was written in French, English, Spanish and Basque: "Climate, social justice: where is Macron?"

"Taking down a portrait is civil disobedience, it's considered as theft" in some parts of France, said another demonstrator called Abram.

When the summit opened on Saturday, more than 9,000 protesters joined a peaceful anti-G7 march across a bridge linking France and Spain, police said, with organisers giving a figure of 15,000 marchers.

But later in the day, things heated up with police using tear gas and water cannon to break up protests in Bayonne, where hundreds chanted anti-capitalist slogans were blocked from reaching the city centre.

By Saturday evening, 68 people had been arrested, 38 of whom were taken into custody, officials said. A source said around 30 were held in custody on Sunday evening.

On Sunday, authorities said 19 people were arrested and 17 of them held in custody as part of the beefed-up security plan for the G7.

Several rights groups protested the arrest of their "observers" including Amnesty International which said two of their observers were arrested by police in Bidart, a community near Biarritz.

Anti-capitalist activists, environmentalists and other anti-globalisation groups have since Monday been flocking to a counter-summit in nearby Hendaye, close to the Spanish border, which has largely been peaceful.

Biarritz is a popular tourist destination that would normally be basking in its annual summer boom, but with US President Donald Trump and other world leaders flying in for three days of talks, the resort was in lockdown.

France has deployed more than 13,000 police and gendarmes to secure the event amid fears of disturbances by radical anti-capitalist groups, anarchists or the yellow vest protesters.