Johnson and wife Marina Wheeler, who have 4 kids together, announced in September that they had separated and would divorce after 25 years. 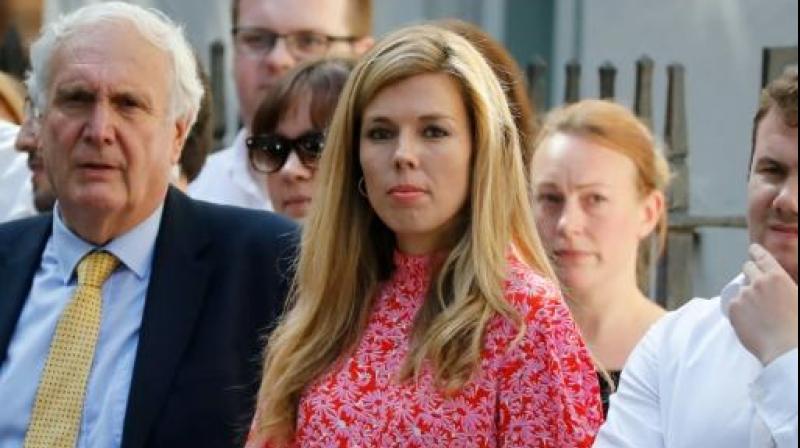 Instead of walking through the door with him, his girlfriend Carrie Symonds, former head of communications for his Conservative Party, stood nearby with his staff - a sign of a colourful private life that arguably represents modern Britain better than the traditional picture. (Photo: AFP)

London: When Boris Johnson entered the famous black door of No. 10 Downing Street as Britain's new Prime Minister, he was the first for nearly half a century to do so unaccompanied by a spouse.

Instead of walking through the door with him, his girlfriend Carrie Symonds, former head of communications for his Conservative Party, stood nearby with his staff - a sign of a colourful private life that arguably represents modern Britain better than the traditional picture.

For decades, the new prime minister has been expected to take part in the somewhat contrived set-piece of giving a cheery wave to the massed ranks of the media on crossing the threshold of No. 10 for the first time - with a spouse, and perhaps their children.

But Johnson, 55, and his wife Marina Wheeler, who have four children together, announced in September that they had separated and would divorce after 25 years.

This was twice the length of the average marriage in England and Wales, where there are 64 divorces each year for every 100 marriages.

The highly visible role of Britain's national leaders has generally meant they are held, however anachronistically, to a somewhat different standard.

"It is difficult for him to walk into Downing Street with another woman when you are still technically married to someone else. That would be considered indiscreet," said Nicholas Allen, lecturer in politics at London's Royal Holloway University.

But Symonds' presence before the cameras, on the sidelines if not by his side, suggests things may slowly be changing.

If Symonds joins Johnson in his official residence, at 31 she will be the youngest partner of a prime minister in 173 years.

By moving in together unmarried, they would be doing something that the vast majority of committed couples do in Britain these days - even if they would be the first to do so openly at No. 10.

Only two of Britain's 54 prime ministers since 1721 have been divorced, and only Augustus Henry FitzRoy, premier from 1768 to 1770, has remarried in office.

Since the end of World War Two, the only single prime minister has been Edward Heath, who served from 1970 to 1974, and never married.

Yet Johnson's marital status was not, in fact, an issue in the leadership contest. The fact that he was elected by members of a party who generally hold traditional views on family matters was testament to that.

His relationship with Symonds did make headlines during the campaign when police were called to the south London home they shared during the night after reports of a huge row.

British police were called to Boris Johnson's home early on Friday morning after a neighbour heard him and his girlfriend Carrie Symonds quarrelling.

Neighbours told the Guardian newspaper that they had heard Symonds telling Johnson to "Get off me!" and "Get out of my flat!" A few days later, a picture of the couple with a happy-looking Symonds appeared in the media, although it appeared staged and Johnson refused to say when it had been taken.

The incident was seized on by the popular tabloid newspapers that have often carried lurid stories about his alleged extramarital affairs - but proved as short-lived as their stories about the television dating shows whose participants are generally expected to sleep with each other.

With his carefully ruffled blond hair and often dishevelled appearance, Johnson's disarming wit and charm have proved popular with the public and helped him to shrug off crises that might have ended others' political careers.

In 2004, he was sacked as the Conservatives' arts spokesman for lying about an affair with a colleague from the Spectator magazine, of which he was the editor. Her mother told a newspaper her daughter had had an abortion.

In 2013, the Court of Appeal dismissed an attempt by a former mistress to stop publication of information about her child with Johnson, ruling that his "recklessness" was "a public interest matter which the electorate was entitled to know when considering his fitness for high public office".

For her part, Symonds, who achieved a first-class degree in theatre studies and history of art and began working for the Conservative Party in 2010, appears to be a political partner as well as a personal one.

She was a member of Johnson's successful campaign to be re-elected mayor of London in 2012 and her roles included special adviser to two ministers before she became the party's head of communications.

Newspapers now credit her for Johnson's slimmer and smarter appearance during his campaign to replace Theresa May as Conservative leader and prime minister.

Politics lecturer Allen said a committed partner could be very important to a prime minister for much more than just a photo call.

"Wives and husbands are among the few people completely on side," he said. "They provide a lot of emotional support. It is a lonely job, it is a tough job, and you do need that."

Johnson was asked during his campaign if Symonds would be joining him in Downing Street.

"On my own life and my family and my loved ones, I took a decision ages ago, long before I even became mayor of London, that I just don't talk about people I love," he said.

"They can't speak for themselves and you drag them into subjects and areas of controversy and discussion that they don't, in my view, deserve or want."