Pope Francis and Trump also disagree on issues like the death penalty and the arms trade but share a fervent opposition to abortion. 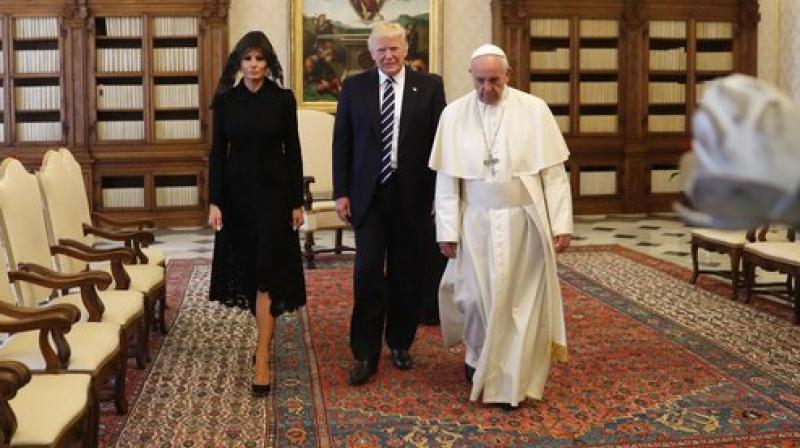 Vatican City: US President Donald Trump met Pope Francis at the Vatican on Wednesday in a keenly-anticipated first face-to-face encounter between two world leaders who have clashed repeatedly on several issues.

The private audience with the pontiff was preceded by a cordial handshake for the cameras and was expected to last around 20 minutes.

It came on the third leg of Trump's first overseas trip as president, which has already taken him to Saudi Arabia and to Israel and the Palestinian territories.

The two men had never met before Wednesday morning but they have significant history having clashed publicly over subjects ranging from migration to unbridled capitalism and climate change.

They also disagree on issues like the death penalty and the arms trade but share a fervent opposition to abortion.

Trump was accompanied for the audience by his wife Melania and daughter Ivanka, both dressed all in black, in keeping with traditional protocol that is no longer always observed by all female dignitaries visiting the Vatican.

The audience took place in the private library of the Apostolic Palace, the official papal residence that Francis does not use, having opted instead for modest lodgings in a Vatican guesthouse.

Immediately after the meeting, the 80-year-old pope was due to give his usual midweek address to the faithful on St Peter's square while the Trump couple are given a private tour of the Sistine Chapel and St Peter's Basilica.

Later in the morning, Trump, 70, will call on Italy's president and prime minister while Melania visits a children's hospital and Ivanka discusses migrant issues with members of the St Egidio religious community.

The Trump team is due to fly to Brussels on Wednesday afternoon for meetings with EU and NATO officials before returning to Italy late Thursday for the G7 summit in Sicily on Friday and Saturday.