Negotiations for a new deal saw the US stand firm on its objection to the so-called “top-down” approach. 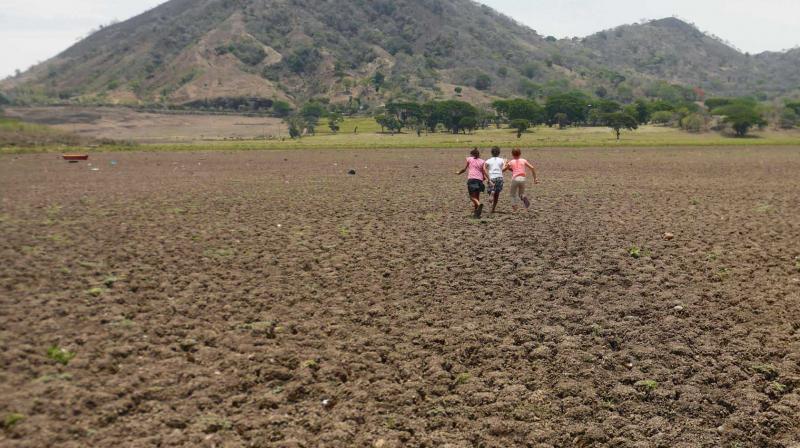 Three girls run and play on what is left of Lake Atescatempa, which has dried up due to drought and high temperatures, in Atescatempa, 174 km southeast of Guatemala City.

Bonn: The shadow of Donald Trump looms large over the climate-rescue Paris Agreement, thrashed out by nearly 200 countries over years of painstaking, often belligerent, bartering in which the United States has a chequered history.

As power has changed hands between Republicans and Democrats, the country has alternatively played an inspirational or obstructionist role over two decades of negotiations for a UN pact to avoid the worst ravages of global warming, observers say.

Ultimately, the US President, in the person of Barack Obama, played a critical role in getting even the most reticent of parties to sign on to the 2015 Paris Agreement that requires everyone to cut back on coal, oil and gas emissions.

Now his successor is threatening to withdraw America from the hard-fought deal — for many just the latest move in a two-steps-forward-one-step-back dance with the world’s second-largest carbon emitter.

Rio Earth Summit
It all started with the 1992 Earth Summit in Rio de Janeiro which set up the UN’s climate convention and launched negotiations for a global deal to rein in global warming.

From the very beginning, Washington resisted any attempt at a “top-down” imposition of emissions cuts, insisting on national sovereignty in setting limits.

Then President George H.W. Bush reportedly told the Rio summit that “the American way of life is not up for negotiations. Period”, linking prosperity to continued carbon emissions.

“Even at that time, fossil fuel interests were quite strong in the process,” said Christian Aid’s Mohamed Adow, who has closely followed the negotiations for years.

Kyoto Protocol
Negotiations for a new deal saw the US stand firm on its objection to the so-called “top-down” approach.

America also insisted that responsibility for emissions cuts must be shared between rich and developing nations.

This put it in conflict not only with the developing world, who insisted that rich countries with a longer history of pollution must make the bigger sacrifice, but also some industrialised nations who saw a need for targets and deadlines.

America’s negotiating partners ultimately agreed on a deal in Japan in 1997 that satisfied Washington’s demands.

Bill Clinton’s vice-president Al Gore signed the treaty in 1998, but the administration could never muster the two-thirds Senate support required to officially ratify it.

His successor, George W. Bush, an oil man, called the agreement “unfair and ineffective” and in 2001, months after taking office, announced he would not ratify it.

Observers say this was largely driven by fear that China and other fast-developing would have an unfair advantage in economic growth, with a licence to exploit fossil fuel.

The treaty entered into force, without America, in 2005, committing 37 developed economies to an average five per cent cut from 1990 levels in the period 2008-2012.

Bali Action Plan
In 2007, the world’s nations gathered for their annual negotiating round in Bali to talk about a replacement for the Kyoto Protocol.

The Bush administration again objected to any differentiation between rich and developing country obligations.

This time, the rest of the world revolted, and the US delegation was booed and told in no uncertain terms by one participant: “If you’re not willing to lead, please get out of the way.”

Washington relented, and the Bali Action Plan was adopted, setting a 2009 deadline for a new treaty to fight global warming.

Copenhagen
The 2009 round of negotiations in the Danish capital, meant to deliver the first truly universal climate pact by the deadline set, ended in near-failure amid bickering between rich and poor countries.

The US, with backing from several other countries, insisted it not be a binding treaty. In the end, the meeting yielded a non-formal “accord”.

Warsaw
In 2013, in Warsaw, the big fight was again about legal obligation, and the wording of a final accord opted for countries to pledge carbon-cutting “contributions” rather than “commitments”.

Paris Agreement
The final result, the 2015 Paris pact, is a compromise. It consists of a legally-binding core agreement and a supporting register of non-binding “Nationally Determined Contributions”, or NDCs, to curb emissions — decided by countries themselves.

This allowed Obama to pass the agreement by executive order, and meant the administration need not submit its NDC to a hostile senate for approval.

“Yet again, other countries went along to keep the US in the regime,” said Alden Meyer of the Union of Concerned Scientists — a veteran observer of the two-decade-old process.

But this very compromise also means there will likely be no repercussions if Trump’s US scraps its NDC, or simply disregards it.

After an imperfect Kyoto Protocol entered into force, “we waited for eight to 10 years” for a new pact, the Paris Agreement.

“Should we wait again?” he asked on the sidelines of UN climate talks in Bonn. “Maybe we should wait another eight or 10 years... But also, it’s with uncertainty. After four years (of Trump) will there be a new President who is favouring” climate action?  “Maybe not.”