Around 400 French firefighters faced a rapidly spreading fire at Notre-Dame as they arrived on the scene on Monday evening. 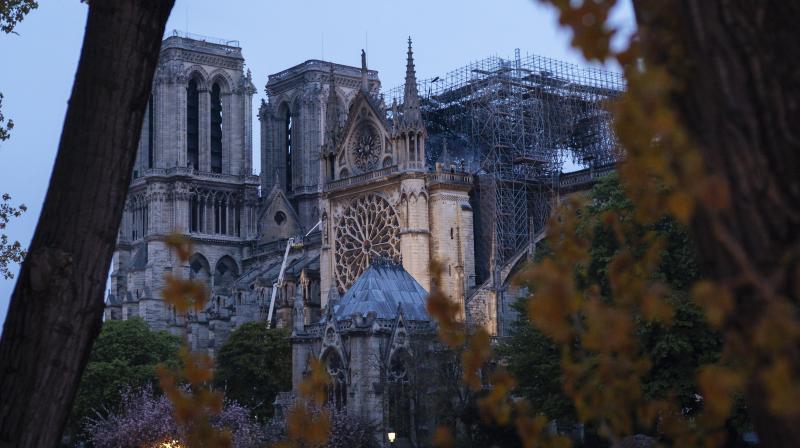 Dozens of fire engines and at least 18 high-pressure aerial hoses were used to contain the blaze. (Photo:AP)

Paris: Around 400 French firefighters faced a rapidly spreading fire at Notre-Dame as they arrived on the scene Monday evening, but appeared to have prevented the complete destruction of the cathedral and managed to rescue some of its priceless artifacts by rushing inside, officials said.

Dozens of fire engines and at least 18 high-pressure aerial hoses were used to contain the blaze which broke out at the Gothic masterpiece at around 6pm (1600 GMT) on Monday evening.

Several drones and a robot were also pressed into action to assess the inferno, but the idea of water-bombing planes -- as suggested by US President Donald Trump -- was quickly dismissed.

Wooden roof beams dating from the 12th century were to blame, but the first-responders had made "saving as many artworks as possible" a priority, Gregoire explained.

Some teams had managed to salvage an unknown quantity of its cultural treasures, he and the head of the Paris fire service said.

President Emmanuel Macron paid tribute to the efforts of the fire service as he visited the scene, sending the "thanks on behalf of the whole nation."

He praised their "extreme courage, their great professionalism and lots of determination by their commanders."

As the steeple and roof collapsed in the early evening, operations had focused on containing the inferno and preventing it spreading to the two 13th-century stone towers on the western facade.

Firefighters also worked to protect the rear of the building "where the most precious artifacts are located," the head of the Paris fire service Jean-Claude Gallet told reporters at the scene.

He said they had been "safeguarded" without giving further details.

Around three and half hours into the vast operation, carried out under the gaze of hundreds of stunned Parisians and tourists, junior interior minister Laurent Nunez warned that one of the towers was at risk.

"If that collapses, you can imagine the scale of the damage," he added.

But the worst appeared to have been averted.

"We can consider that the main structure of Notre-Dame has been saved and preserved," Gallet told reporters at around 11pm local time.

He said that the main task now was to cool the temperature inside the cathedral, a procedure that would take several hours.

Officials were quick to dismiss suggestions from Trump that water-bombing planes should be pressed into action.

"Perhaps flying water tankers could be used to put it out. Must act quickly!" Trump tweeted.

Nunes said that such action would have posed a "major danger" for the structure.

Assessing the damage is expected to take days.

"Obviously we fear the worst in terms of damage given the scale of the fire," Gregoire said.