World   Europe  15 May 2017  Jadhav could be hanged before arguments are heard: India to ICJ
World, Europe

Jadhav could be hanged before arguments are heard: India to ICJ

The present situation, attorney Harish Salve said before the court, was grave and that is why India had sought ICJ's indulgence. 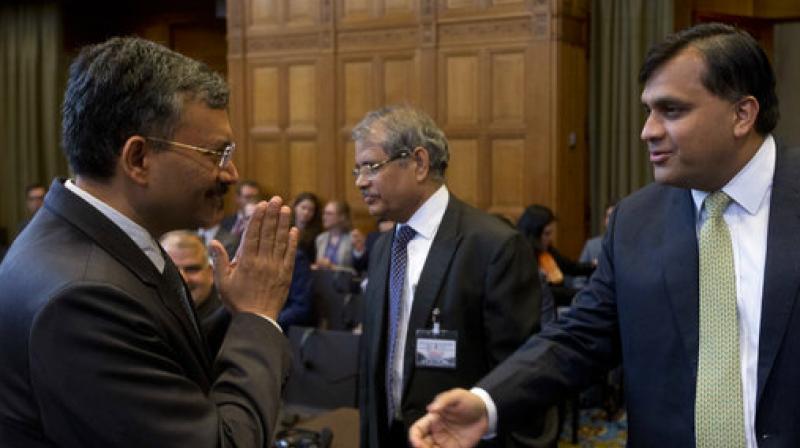 The Hague: India on Monday called for immediate suspension of its national Kulbhushan Jadhav's death sentence and accused Pakistan of violating the Vienna convention by denying its 16 requests for consular access.

As the International Court of Justice (ICJ) began hearing Jadhav's case, India argued that human rights which are basic had been thrown to the wind by Pakistan.

All request for consular access to 46-year-old Jadhav had fallen on "deaf ears", it said.

The present situation, attorney Harish Salve said before the court, was grave and that is why India had sought ICJ's indulgence.

India also fears that Jadhav could be executed by Pakistan before its arguments are heard, Salve alleged, reiterating the urgency of the issue.

The Indian national, who had been arrested on March 3 last year and sentenced to death on allegations of espionage and subversive activities, had been framed on the basis of confessional statements extracted from him when he was in Pakistan's military custody, Salve added.

The ICJ has asked India to present its case first, followed by Pakistan later in the day. Both sides will get 90 minutes each to argue their case before the UN's principal judicial body.

It also said that India could avail a "short extension" beyond 90 minutes to present its case, the judge had said in his opening remarks.

On the other hand, according to media reports, Pakistan is likely to base its case at the International Court of Justice (ICJ) against India on the confession statement of Indian national Kulbhushan Jadhav, a media report said.

A Pakistan military court had awarded the death sentence to Jadhav last month for espionage and subversive activities.

Jadhav had been arrested on March 3 last year.

India had appealed against the death sentence on May 8 alleging violation of the Vienna Convention on Consular Relations by Pakistan after its 16 requests for consular access were denied.

The next day, ICJ stayed the sentence.

India, in its appeal to the ICJ, has asserted that Jadhav was kidnapped from Iran where he was involved in business activities after retiring from the Indian Navy.

India acknowledges that Jadhav had served with the Navy but denies that he has any connection with the government.

The ICJ was last a battleground for India and Pakistan nearly 18 years ago when Islamabad sought its intervention over the shooting down of its naval aircraft.