India raises concern over terrorism emanating from Pakistan at UN

Pakistan has launched a diplomatic offensive against India on the Kashmir issue. 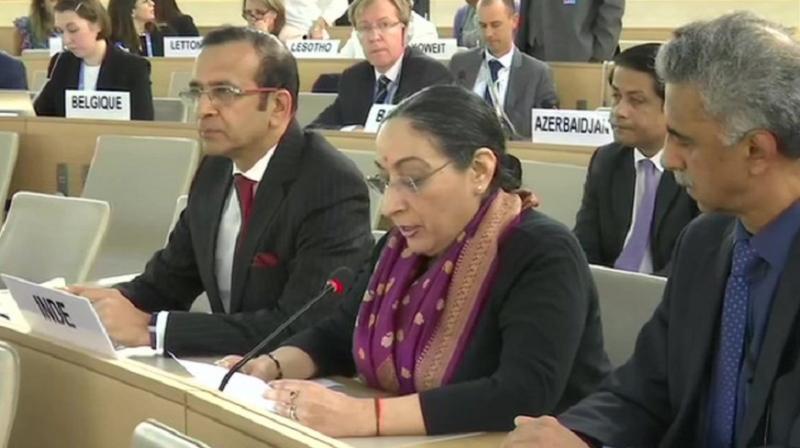 During her meeting with the UNHR High Commissioner, Singh "conveyed India's concerns on the threat posed by cross border terrorism emanating from Pakistan", he said.

Speaking at the 42nd session of the United Nations Human Rights Council (UNHRC) on Tuesday, Singh hit out at Pakistan's "malicious" campaign on the Kashmir issue and condemned "state sponsored terrorism".

In a clear reference to Pakistan, she said those who speak on the human rights of minorities in other countries are "trampling upon them at will in their own country. They cry victim when they actually are the perpetrators".

On Monday, Bachelet had expressed "deep concern" over the impact of restrictions in Kashmir, and asked India to ease the current lockdowns to ensure people's access to basic services.

Responding to Bachelet's Oral Update, Singh in her UNHRC address said that the recent legislative measures taken by India in Jammu and Kashmir were within the framework of its Constitution.

"These decisions were taken by our Parliament...We wish to reiterate that this sovereign decision...is entirely internal to India. No country can accept interference in its internal affairs, certainly not India," she said.

The Modi government on August 5 revoked Jammu and Kashmir's special status and bifurcated the state into two union territories, evoking protests from Pakistan, which downgraded diplomatic relationship with India.

Pakistan has launched a diplomatic offensive against India on the Kashmir issue.