Heavy equipment, including 87 Abrams tanks and over 500 personnel carriers, stationed. 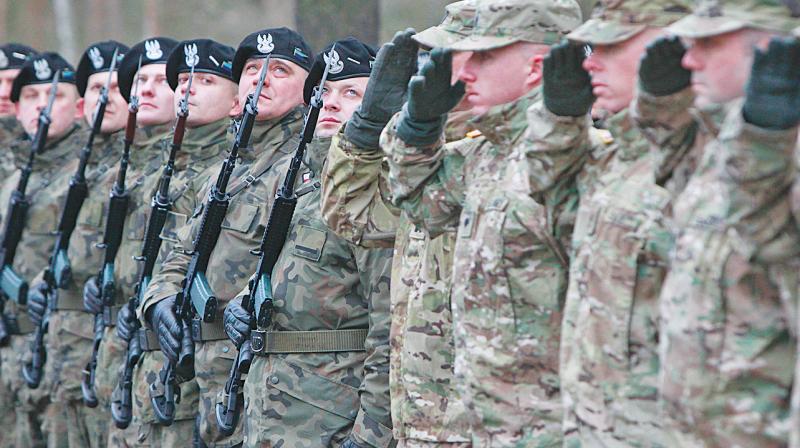 US soldiers being welcomed in Zagan, Poland, on Thursday. The troops arrived at the Zagan base in western Poland. (Photo: AP)

Olszyna (Poland): US troops and tanks began arriving in Poland on Thursday, part of one of the largest deployments of US forces in Europe since the Cold War that will eventually involve more than 3,000 soldiers.

The Pentagon operation sparked immediate anger from Russia, with the Kremlin describing it as a “threat” on its “doorstep”.

The Atlantic Resolve mission will see an armoured brigade with  more than 3,000 Amercian soldiers and heavy equipment deployed in Poland and nearby Nato partners Estonia, Latvia, Lith-uania, Romania, Bul-garia and Hungary on a rotational basis.

The outgoing Obama administration ordered the deployment in 2014  to reassure eastern allies after Russia’s actions in Ukraine.

But the operation comes a week ahead of the inauguration of US President-elect Donald Trump, who has suggested his Republican administration  will seek to ease tensions with the Kremlin.

A contingent of US troops entered Poland at the Olszyna border  crossing with Germany on Thursday.

Heavy equipment, including 87 Abrams tanks and over 500 personnel  carriers including military-equipped Humvees were to follow.

Last summer, Nato leaders also endorsed plans to rotate troops  into Poland and the three Baltic states to reassure them they would not be left in the lurch if Russia was tempted to repeat its 2014 Ukraine intervention.

A separate US-led battalion working within the Nato framework will be stationed near Poland’s north-east border with Russia’s Kaliningrad exclave.

Moscow has stepped up its presence in the Baltic Sea area over the last two years.

Its jets regularly violate the airspace of smaller ex-Soviet Nato allies like Estonia and in April they even buzzed a US naval destroyer.