Sering said people in the Gilgit-Baltistan, Ladakh, Jammu were waiting for the situation to evolve and reach a solution. 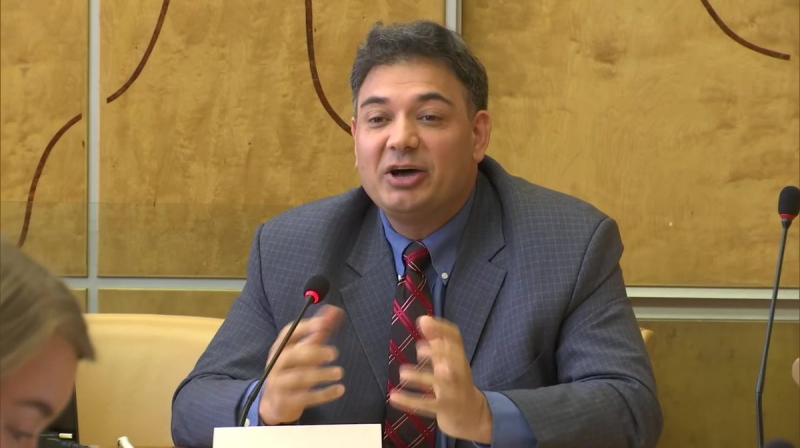 Senge H Sering said Pakistan has failed in propagating its message in the international community and will play ‘the jihadi’ card. (Photo: ANI)

Geneva: Pakistan is making a hue and cry over India's decision to repeal Article 370 but has no locus standi in the matter, says Senge H Sering, Director, Institute of Gilgit Baltistan Studies, Washington DC.

He also said Article 370 had become a tool to spread terrorism in Jammu and Kashmir.

"Article 370 had become a tool in the hands of few in Jammu and Kashmir- a veto power over other ethnic and religious groups. Also, the Article worked in Pakistan's favour to become a tool to enhance terrorism in Jammu and Kashmir. People who were benefitting from it, became allies of the Pakistani military and were promoting Pakistan's strategic interests in J&K," Sering said.

He said the people who were benefiting from Article 370 became allies of the Pakistani military and they were promoting Pakistan's strategic interest in Kashmir.

"If you would have given them another 500 years they would have loved to hold on to the status quo. That is exactly how Pakistan and the leadership in Kashmir were benefiting from," he told ANI.

Sering said people in the Gilgit-Baltistan, Ladakh, Jammu were waiting for the situation to evolve and reach a solution.

"But there were people in Pakistan and Kashmir who were happy with the status quo and they wanted this to go on and use the terrorist group to enhance their own bargaining power. Now that the section is gone, the smaller religious groups are happy and the so-called autonomy that impeded the growth of the region will no longer stand its way of progress," he said.

"The Pakistani side has no locus standi in the matter but they are making a hue and cry," he added.

Sering said Pakistan was not taking the cost" of the people of Jammu, Kashmir valley and Ladakh region.

"India was bearing the financial cost and the cost of lives and Pakistan gained the strategic benefit," he said adding that India has taken a decisive decision.

Sering said Islamabad is pretending to stand for the people of Gilgit-Baltistan and Kashmir but the international community and the permanent five members of the United Nations Security Council know how Pakistan has been "using and abusing" the people of Jammu and Kashmir for its own benefit.

He said Pakistan has failed in propagating its message in the international community and will play "the jihadi" card.

"Islamabad will continue its policy of promoting terrorism in the Jammu and Kashmir because when it comes to diplomatic and peaceful negotiation, Pakistan has no chair on that table," he said.

Article 370, which gave special powers to Jammu and Kashmir, was repealed by the government last month.