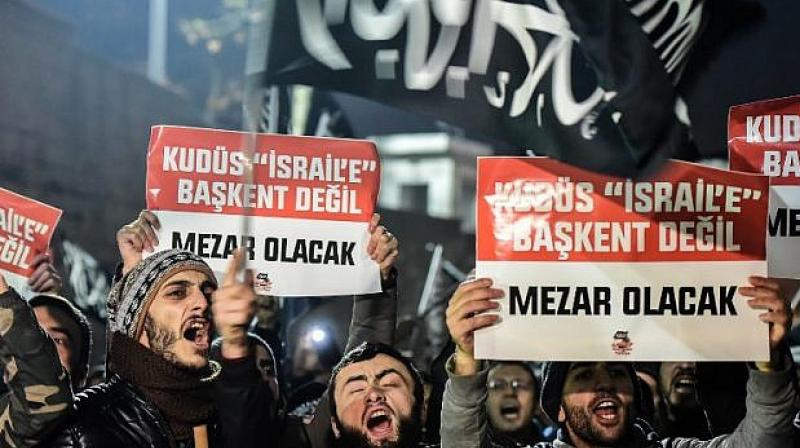 Pro-Palestinian protesters also held Muslim prayers outside the Hagia Sophia, a former Byzantine church that was turned into a mosque after the Ottoman conquest of Istanbul but is now a museum. (Photo: AFP)

Istanbul: Turkish riot police Sunday detained a dozen activists at a protest in Istanbul denouncing Israel and the United States after Washington's recognition of Jerusalem as the Israeli capital.

Holding banners such as "against imperialism, Zionism and their domestic partners", the protesters gathered in Kadikoy on the Asian side of Istanbul.

Police moved in and detained around a dozen protesters, pinning some face down on the ground and wrenching the hands of others behind their backs, an AFP photographer said.

Protests by religious conservative Turkish groups against the US move to recognise Jerusalem have proceeded peacefully in Turkey in recent days.

But Istanbul police frequently crack down on leftist anti-government protests.

Pro-Palestinian protesters also held Muslim prayers outside the Hagia Sophia, a former Byzantine church that was turned into a mosque after the Ottoman conquest of Istanbul but is now a museum.

Some conservative Turks have argued it should be turned back into a mosque, a move that would risk an international backlash.

"We want the Palestinian people and the Muslim people to find a free Jerusalem. We want the Israeli occupier to leave it. We want to denounce with all our means the unfair decision," said protester Muzeyfe Altug.

Turkey's religiously conservative Saadet (Felicity) Party is also due to hold a mass rally in Istanbul over Jerusalem on Sunday.

Turkish President Recep Tayyip Erdogan has led opposition to the decision by US President Donald Trump to recognise Jerusalem as the israeli capital and has called a summit of Islamic countries on December 13 in Istanbul.