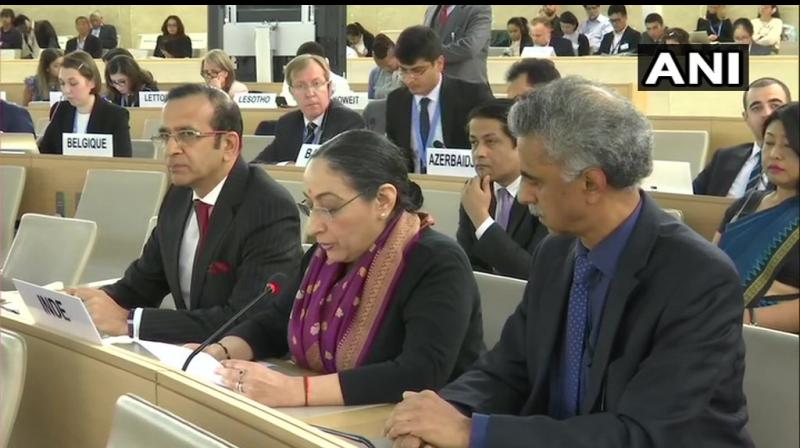 She also said, "As a result of recent legislative measures progressive policies will now be fully applicable to our citizens in Jammu and Kashmir and Ladakh. These will end gender discrimination, better protect juvenile rights and make applicable rights to education, information and work."

"The decisions were taken by our Parliament after a fully televised debate and enjoys widespread support. These were soverign decisions entirely internal to India. No country can accept interference in its internal affairs, certainly not India," Singh added.

She also said despite challenging circumstances Jammu and Kashmir civil administration in ensuring basic services, mobility and connectivity. Democratic processes have been initiated, restrictions are being eased continuously, temporary restrictive measures were necessary in the face of credible threats of cross-border terrorism.

Talking about Pakistan's rhetoric on the Kashmir issue, Singh said, "One delegation has given a running commentary with offensive rhetoric of false allegations and concocted charges against my country. World is aware that this fabricated narrative comes from epicentre of global terrorism,where ring leaders were sheltered for years. This country conducts cross-border terrorism as a form of alternate diplomacy."

Bringing up the topic of Assam's NRC, Singh said, "NRC is a statutory, transparent, non-discriminatory legal process mandated and monitored by Supreme Court of India. Any decision that is taken during its implementation will comply with Indian Law and will be consistent with India’s democratic traditions."