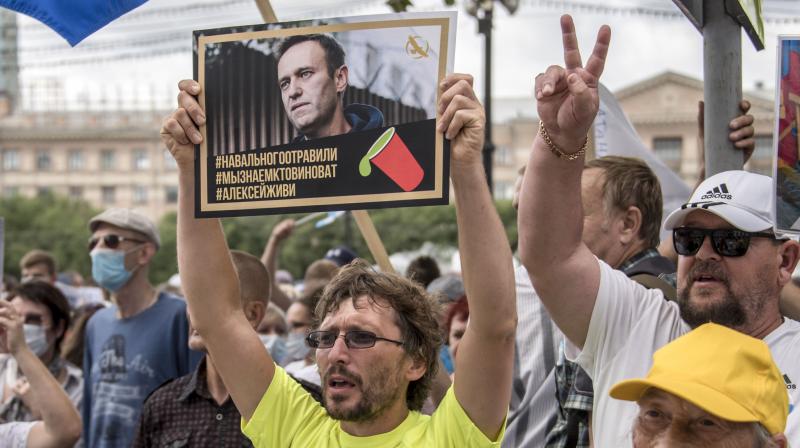 A man holds a poster with a portrait of Alexei Navalny reading "Navalny was poisoned, we know who is to blame, Alexei you must live" during an unsanctioned protest in Russia. Russian authorities have appeared reluctant to investigate what caused Navalny’s condition, saying there had so far been no grounds for a criminal investigation. (AP)

Navalny, a Kremlin critic and corruption investigator, fell ill on a flight to Moscow on Aug. 20 and was taken to a hospital in the Siberian city of Omsk. He has been in an induced coma in a Berlin hospital since he was flown to Germany for treatment more than a week ago.

German authorities have said that tests showed that he had been poisoned with a chemical nerve agent from the Novichok group. British authorities previously identified the Soviet-era Novichok as the poison used on former Russian spy Sergei Skripal and his daughter in England in 2018.

“There is proof beyond doubt that Mr. Navalny was poisoned using a military-grade nerve agent from the Novichok group. The use of such a weapon is horrific,” Stoltenberg said after chairing a meeting of NATO ambassadors during which Germany briefed its allies on developments.

“Any use of chemical weapons shows a total disrespect for human lives and is an unacceptable breach of international norms and rules. NATO allies agree that Russia now has serious questions it must answer,” he told reporters.

Stoltenberg said Moscow must cooperate with the international chemical weapons organization in “an impartial, international investigation” and provide information about its Novichok program.

Russian authorities have appeared reluctant to investigate what caused Navalny’s condition, saying there had so far been no grounds for a criminal investigation. Interior Minister Vladimir Kolokoltsev said Friday that a preliminary inquiry was ongoing, but added that he saw no signs of a crime in what happened to the most determined critic of Putin.

Asked about the case Friday, President Donald Trump told reporters that “I don’t know exactly what happened,” adding that “we haven’t had any proof yet.” But later he said he would not be happy if Russia did poison Navalny, ”and that seems to be the case.”

White House press secretary Kayleigh McEnany said Thursday that Navalny was the victim of a “reprehensible” poisoning. “Russia has used chemical nerve agents in the past,” he added, “and we’re working with our allies and the international community to hold those in Russia accountable wherever the evidence leads and restrict funds for their malign activities.”

Putin’s spokesman has brushed off allegations that the Kremlin was involved in poisoning Navalny and said Thursday that Germany hadn’t provided Moscow with any evidence about the politician’s condition.

“We have nothing to hide,” Russian Foreign Minister Sergey Lavrov said Friday, asserting that German authorities had stonewalled Russian requests for information.

Lavrov said the failure to provide information about Navalny’s poisoning could indicate a lack of evidence.

“Our Western partners allow themselves to make arrogant demands in such a tone that suggests that they have nothing but pathos to put on the table,” he said.

On Friday evening, state television in Belarus released what it claimed to be the recording of an intercepted telephone call of German and Polish representatives suggesting the German allegation of poisoning was fake.

In the English-language recording, overdubbed in Russian, a purported German official identified only as “Nick” says a report on the case is being prepared to be sent to German Chancellor Angela Merkel. The purported Pole asks if the report confirms poisoning.

“Listen, Mike, in this case that’s not so important. There’s a war going on, and in war all methods are good,” Nick replies. The other man says Russian President Vladimir Putin must be discouraged from interfering in Belarus and that “the most effective way is to drown him in the problems of Russia.”

Belarus has been shaken for the past four weeks by wide-scale calls for the resignation of authoritarian President Alexander Lukashenko in the wake of an allegedly fraudulent election that gave him a sixth term in office.

After the March 2018 attack on the Skripals in the English city of Salisbury — territory of a member of the 30-nation alliance — NATO withdrew the accreditation of seven staff members at Russia’s mission to the military alliance and rejected the applications of three others. No such action was announced Friday.

Earlier Friday, German government spokesman Steffen Seibert insisted it was up to Moscow to answer questions about what had happened to Navalny.

“Russia has information about the poison attack or can obtain them, not us,” he told reporters in Berlin.

“Numerous samples were taken in Russia, and objects were seized,” Seibert said. “We expect the Russian government to explain itself in this case.”

Berlin prosecutor’s office said judicial authorities in the German capital were examining a request for information from Russian law enforcement and would decide whether to grant it, if necessary in consultation with German federal authorities. It didn’t specify how long a decision might take.

The foreign ministers of Germany and France said Russia had the first responsibility to investigate what they described as a “deeply shocking” case.

“Those responsible for this despicable act must be found and put on trial,” Germany’s Heiko Maas and France’s Jean-Yves Le Drian said in a statement Friday.

The two foreign ministers also called on Moscow to guarantee the rights of Russian citizens to exert their civil and political rights, noting that the alleged poisoning of Navalny wasn’t the first attack on opposition figures in Russia.

Le Drian later told reporters during a news conference that Russia must “explain the facts, with transparency, so that everyone can be informed.” He said that France would work with Germany, which holds the EU presidency, “to take the necessary measures for Russia to explain itself.”