3 terrorists of London attack identified, names to be released soon: UK PM May

I believe it is right that the UK is engaged in taking on and defeating groups like IS and their like around the world, Theresa May said. 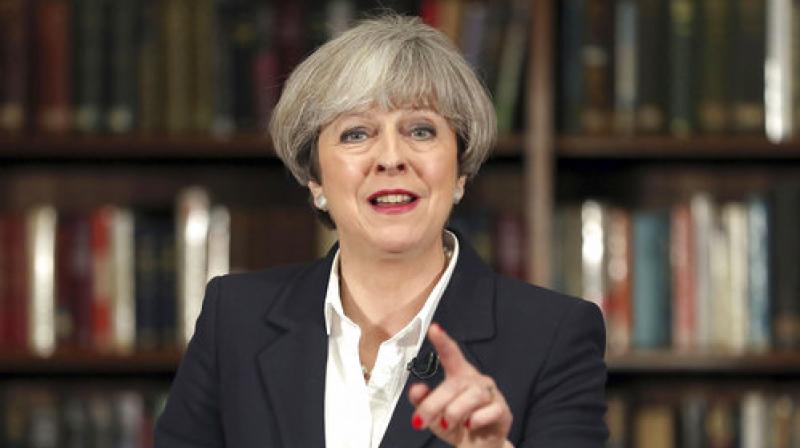 London: British Prime Minister Theresa May on Monday said the three terrorists responsible for the London attack have been identified and their names would be revealed soon, even as police conducted fresh raids in two more places.

In all, seven women and five men aged between 19 and 60 were arrested under the Terrorist Act in Barking on Sunday.

A 55-year-old man was later released without charge.

"All the three terrorists responsible for the Saturday night's terror attack at London Bridge have been identified and their names will be released by police as soon as operationally possible," May said, answering questions after her address at the Royal United Services Institute.

According to the Scotland Yard, one of the terrorists carried Irish identity card.

Seven people died and 48 others were injured, 21 of them seriously, in the terror attack, the police said.

"A number of people have been detained," police said in a statement after two early morning raids in east London.

London police chief Cressida Dick told BBC TV that they have seized ‘a huge amount of forensic material’ after going through the van used in the attack ‘very very carefully’.

"A very high priority for us is to try to understand whether they were working with anybody else," she said.

The first victim of the attack has been named as Canadian national Christine Archibald who worked in a homeless shelter until she moved to Europe to be with her fiancé.

May referred to the three terror attacks in the UK during the last three months, saying "we cannot deny that the threat from Islamist extremism is one of the gravest we face."

She said, "I believe it is right that the UK is engaged in taking on and defeating groups like IS and their like around the world. It is in our own national interest to do so, and it is in the interests of the wider world.

"But as our efforts to defeat them overseas are ever more successful, they are increasingly seeking to spread their poisonous ideology and to prey on the weak and vulnerable in our own countries, inspiring them to commit acts of terror here at home. They exploit the safe spaces of the internet and social media and they exploit them in the real world too."

She said the UK has led the world in developing a strategy for preventing violent extremism, and it has been highly successful.

But she admitted "we must do more - much more - to take on and defeat the evil ideology of Islamist extremism that preaches hatred, sows division, and promotes sectarianism...We must deny it the safe spaces it needs to take root and grow."

Asserting that Britain will continue to support military action to destroy IS in Iraq and Syria, she said, "working with other democratic governments we will agree ways to regulate cyberspace and prevent the spread of extremism and terrorist planning online."

She said that her government would do more to deny this ideology the physical space it needs to breed in the UK. "It means refusing to tolerate extremism of any kind in our country."

"This is what we must do if we are to come together as a country and tackle this extremism in our midst - not just violent extremism, but the whole spectrum of extremism, starting with the bigotry and hatred that can so often turn to violence too," the prime minister said.

With the Brexit negotiations beginning just 11 days after the June 8 polls, May said, "we have no time to waste. So I offer myself as Prime Minister once more, with a resolute determination to get on with the job of delivering Brexit, confidence that I can get a deal that works for all, and belief that I have the vision, the plan, the will and the experience to fulfil the promise of Brexit and build a better Britain."

Answering questions, she said the Mayor of London Sadiq Khan was doing an ‘excellent job’ and US President Donald Trump was wrong in withdrawing from the Paris Climate Deal.