Modi refused to be drawn into a debate on whether he supported or was opposed to President Trump’s action. 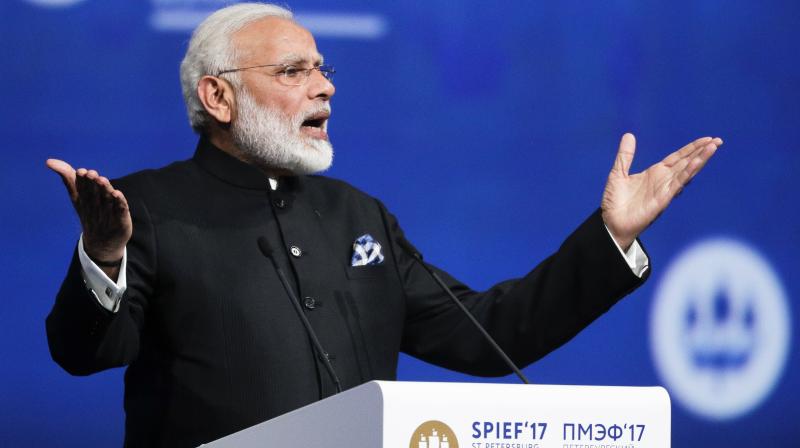 New Delhi/Washington/ St. Petersburg: Prime Minister Narendra Modi said in St. Petersburg on Friday that India is committed to protecting the climate, irrespective of the Paris agreement, hours after President Donald Trump withdrew the US from the landmark accord, saying it unfairly benefits countries like India and China.

Mr Trump also said that India makes its participation contingent on receiving billions and billions and billions of dollars in foreign aid from developed countries. More than 190 countries agreed to the deal in December 2015. Mr Trump said the deal would wipe out US jobs, weaken American national sovereignty and put the country at a permanent disadvantage to others.

Though there was a mix of dismay and anger among world leaders and environmentalists after Mr Trump’s move, PM Modi refused to be drawn into a debate on whether he supported or was opposed to President Trump’s action.

Mr Modi said he was asked a similar question in Germany earlier this week before the US decision was made public. At the time, PM Modi said, he had replied, “Paris or no Paris, it is our conviction that we have no right to snatch from our future generation their right to have a clean and beautiful earth.”

He said, “I don’t think I should go this side or that. This subject is of future generations and I would go towards future generations. It is part of our thinking and for that reason we do not believe in exploitation of the nature.”

He reiterated, in the presence of Russian President Vladimir Putin, India’s commitment to reducing carbon emission and leaving an earth which is “beautiful and pure” for the future generations.

Earlier in the day, Mr Trump’s rash utterances left India stunned. “Think of it: India can double their coal production. We’re supposed to get rid of ours,” the US President lashed out, adding that “compliance with the terms of the Paris Accord and the onerous energy restrictions it has placed on the US could cost America as much as 2.7 million lost jobs by 2025”.

Mr Trump further said, “In short, the agreement doesn’t eliminate coal jobs, it just transfers those jobs out of America and ships them to foreign countries.”

China and Europe pledged on Friday to unite to save what German Chancellor Angela Merkel called “our Mother Earth”, standing firmly against President Trump’s decision. Others signalled their commitment to the accord, but Mr Putin said that while the US should have remained in the deal, he would not judge Mr Trump, and warned about the accord’s impact on jobs and poverty.

Mr Trump’s mention of India — a strategic partner of the US — in such unflattering terms may end up straining Indo-US ties. The fact that Mr Trump referred to India along with China is certain to not go down well with New Delhi. Whether this will have any impact on plans for Mr Modi’s visit to the US — that was likely to take place towards the end of this month — remains to be seen.

The Paris agreement commits the US and other countries to keep rising global temperatures “well below” two degrees Celsius above pre-industrial levels and “endeavour to limit” them to 1.5 degrees Celsius.

Meanwhile, the Centre for Science and Environment (CSE) said President Trump’s decision was a “death knell” for the climate agreement. But the US move was an opportunity for India to provide global leadership on the issue, it said.

This is not the first time that the US was opting out of an international climate agreement, environmentalists pointed out. It had pulled out of the Kyoto Protocol, saying emerging economies did not have quantified emission targets.

“With the US President’s latest assault on the global fight against climate change, meeting the objectives of the Paris Agreement will become an uphill task. Trump has sounded the death knell for the Agreement,” the CSE’s D.G. Sunita Narain was quoted as saying.