The two devices were fired from the Wonsan area on the east coast at dawn and flew around 250 kilometres (155 miles) into the sea. 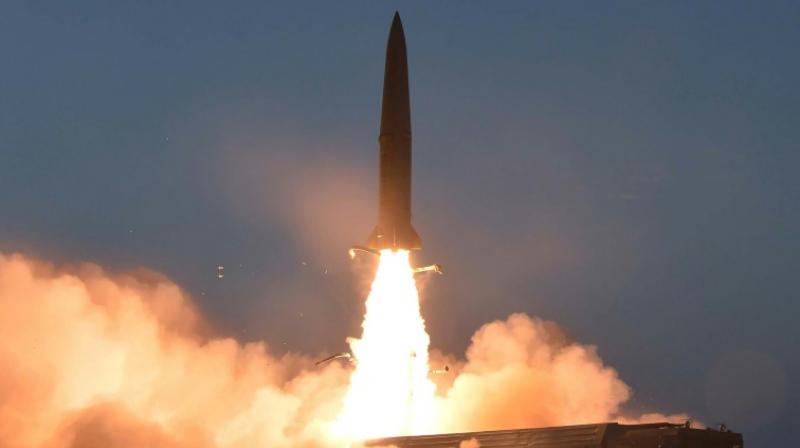 The missiles fired by the North last week were described as a new type of tactical guided short-range weapon. (Photo: AFP)

Seoul: Pyongyang fired two ballistic missiles on Wednesday, Seoul said, days after a similar launch that the nuclear-armed North described as a warning to the South over planned joint military drills with the United States.

The two devices were fired from the Wonsan area on the east coast at dawn and flew around 250 kilometres (155 miles) into the sea, said South Korea's Joint Chiefs of Staff.

"We stress a series of missile launches do not help ease tensions in the Korean Peninsula and urge the North to refrain from such acts," they said in a statement, while the presidential Blue House expressed "strong concern".

The North is banned from ballistic missile launches under UN Security Council resolutions but it was the second such firing in less than a week, despite a meeting between leader Kim Jong Un and US President Donald Trump last month.

Pyongyang and Washington are engaged in a long-running diplomatic process over the North's nuclear and missile programmes that has seen three high-profile encounters between their leaders in the space of a year.

They agreed to resume talks during their impromptu June encounter in the Demilitarised Zone that divides the peninsula, but that working-level dialogue has yet to begin.

Pyongyang has warned the negotiations could be derailed by Washington and Seoul's refusal to scrap the annual manoeuvres between their forces.

The North has defied years of isolation and sanctions to develop its arsenal and has not given up any of its weapons, while proving itself adept at dragging out discussions.

On his way to an Asian regional forum where the North will be high on the agenda -- even though its foreign minister will apparently not attend -- US Secretary of State Mike Pompeo told reporters that the talks had been expected "within weeks" but were taking "a little bit longer" to start.

There was no immediate comment from Pyongyang on the latest launch, but Harry Kazianis of the Center for the National Interest in Washington said it was a warning to the two security allies to stop the exercises or the North will "raise tensions to a slow boil over time".

Pyongyang will carry out more launches before the drills begin next week and again afterwards, he predicted.

"The only question is: would the Kim regime dare test an ICBM, or a long-range missile, that could hit the US homeland?"

With its short-range launches, Pyongyang was looking to pressure Washington to "come to the table with more readiness to meet its demands", added Jeong Young-tae, director of the Institute of North Korean Studies.

Last Thursday's missiles travelled much further -- one of them going nearly 700 kilometres -- than Wednesday's, and also reached a higher altitude, 50 kilometres compared to 30.

Pyongyang said they were newly designed "tactical guided weapons" that were a "solemn warning to the South Korean warmongers" over the planned military drills with the US.

The North also showed off a new submarine last week, which reports on Wednesday cited the South's defence ministry as saying appeared to be capable of carrying three submarine-launched ballistic missiles.

Washington stations nearly 30,000 troops in the South to defend it from its neighbour, which invaded in 1950.

The devices were widely described as ballistic missiles, including by the US-South Korean Combined Forces Command and the government in Seoul.

But Trump -- who has repeatedly touted his relationship with Kim, whose regime is widely accused of human rights abuses -- brushed off the North's bellicose language, saying it was warning Seoul rather than Washington.

The Korea Times condemned what it called the US president's "willful ignorance" in an editorial Tuesday, before the latest launches.

Trump "gives the impression that he doesn't mind its missile launches as long as they are short-range, and not threatening the US", it said.

"Such a way of thinking is frustrating -- and dangerous," it added. "Most of all, he can give the wrong signal to the North that the US will not step in as long as it does not target the US mainland. What about US allies in Asia?"