China says US action on Hong Kong ‘doomed to fail’

Small groups of Beijing supporters marched to the U.S. Consulate in Hong Kong on Saturday carrying Chinese flags and signs 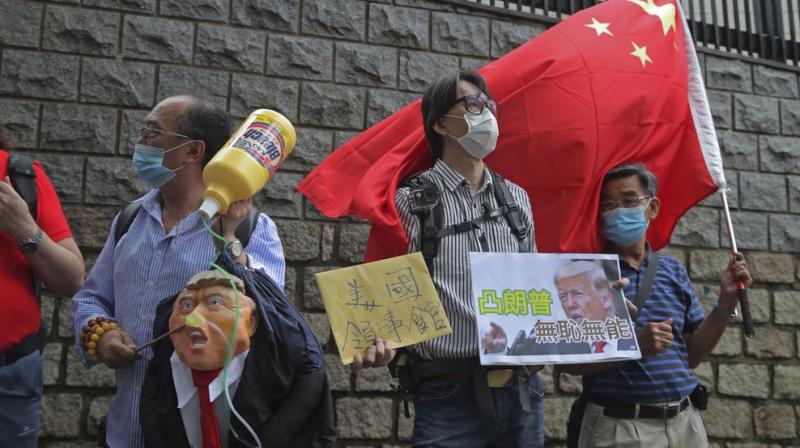 Pro-China supporters hold the effigy of U.S. President Donald Trump and Chinese national flag outside the U.S. Consulate during a protest, in Hong Kong, Saturday, May 30, 2020.(AP)

Beijing: The mouthpiece newspaper of China’s ruling Communist Party said that the U.S. decision to end some trading privileges for Hong Kong “grossly interferes” in China’s internal affairs and is “doomed to fail.”

The Hong Kong government called President Donald Trump’s announcement unjustified and said it is “not unduly worried by such threats,” playing down concern that they could drive companies away from the Asian financial and trading center.

An editorial Saturday in China’s official People’s Daily newspaper said that attempts at “forcing China to make concessions on core interests including sovereignty and security through blackmailing or coercion ... can only be wishful thinking and day-dreaming!”

Trump’s move came after China’s ceremonial parliament voted Thursday to bypass Hong Kong’s legislature and develop and enact national security legislation on its own for the semi-autonomous territory. Democracy activists and many legal experts worry that the laws could curtail free speech and opposition political activities.

The Chinese government issued no official response Saturday, but has said previously it would retaliate if the U.S. went ahead with its threat to revoke trading advantages granted to Hong Kong after its handover from British to Chinese rule in 1997.

“This hegemonic act of attempting to interfere in Hong Kong affairs and grossly interfere in China’s internal affairs will not frighten the Chinese people and is doomed to fail,” the People’s Daily said.

Elsewhere in the city, youthful activists including Joshua Wong held a news conference to welcome Trump’s announcement and try to downplay any economic fallout.

Tensions between the U.S. and China over Hong Kong have increased over the past year, with the U.S. defending pro-democracy protesters who clashed with police last year and China vilifying them as violent rioters and separatists.

“It is now clear that Hong Kong is caught in the middle of major China-U.S. tensions,” said Tara Joseph, president of the American Chamber of Commerce in Hong Kong. “That is a real shame for Hong Kong and it will be a challenge in the months ahead.”

Joseph said there were many unanswered questions about how the trading relationship will unravel and predicted that “it won’t be like flipping a switch.”

U.S. Secretary of State Mike Pompeo set the stage for Trump’s announcement by notifying Congress on Wednesday that Hong Kong no longer has the high degree of autonomy that it is guaranteed under the “one country, two systems” framework.

Trump said Friday that his administration would begin eliminating the “full range” of agreements that had given Hong Kong a relationship with the U.S. that mainland China lacked, including exemptions from controls on certain exports.

“China has replaced its promised formula of one country, two systems, with one country, one system,” he said, echoing recent statements by pro-democracy activists in Hong Kong.

The Hong Kong government accused Trump and his administration of smearing and demonizing the government’s duty to safeguard national security and called allegations that the security law would undermine individual freedoms “simply fallacious.”

“President Trump’s claim that Hong Kong now operated under ‘one country, one system’ was completely false and ignored the facts on the ground,” it said in a written statement.

Separately, Hong Kong Secretary for Justice Teresa Cheng told reporters that it was “completely false and wrong” to say the territory was losing its autonomy.

She also criticized the U.S., saying “any other state that tries to use coercion or whatever means with a view to interfering with the sovereign right of a state to pass its own national security law is arguably infringing on the principle of non-intervention under public international law, and that is not acceptable.”

Washington’s response could include U.S. travel bans or other sanctions on officials connected with the crackdown on last year’s pro-democracy protests, including members of the Hong Kong police force.

“Whatever attempt at suppressing or intimidating Hong Kong officials there may be, I think it won’t succeed, because we believe what we are doing is right,” said John Lee, Hong Kong’s secretary for security.

China decided to impose a national security law on the city after successive Hong Kong governments were unable or unwilling to do so themselves because of stiff public opposition. The one attempt to do so in 2003 was abandoned in the face of major protests.

Beijing’s resolve to move forward appears to have been hardened by the months of anti-government protests last year and a determination to prevent them from coming back this summer.