The failure of the protests has left Pakistan red-faced even as it continues its pursuit of raking up the issue in international foras. 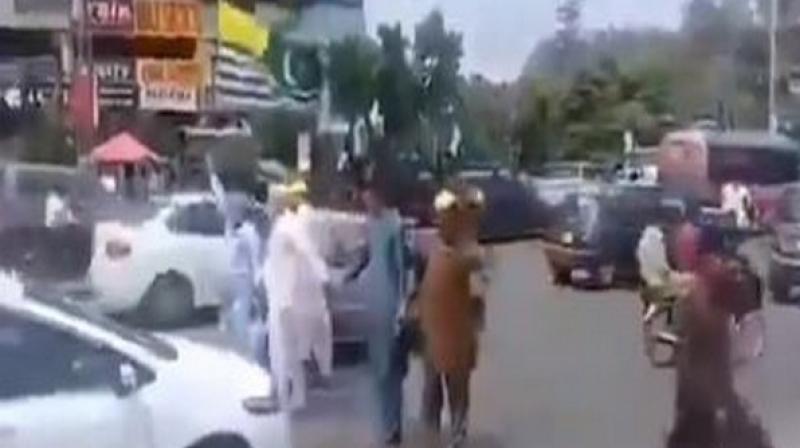 Pakistan is rattled by the Indian government's move to strip the special status accorded to Jammu and Kashmir under Article 370 and has found itself completely isolated despite desperate attempts aimed at internationalising the issue. (Photo: ANI)

Islamabad: Despite Pakistan's persistent attempts to internationalise the Kashmir issue, its so-called 'solidarity hour' for the Kashmiris has turned out to be a damp squib, inflicting a massive blow to Islamabad.

The cash-strapped country observed the 'Kashmir Solidarity Hour' from 12 pm to 12:30 pm today after Prime Minister Imran Khan had said he will become the "ambassador" for all Kashmiris in the wake of India's decision to abrogate Article 370 of the Indian Constitution that granted special status to Jammu and Kashmir.

The much-hyped 'Kashmir Solidarity Hour' failed to garner much attention among the Pakistanis. Pakistani authorities made desperate attempts to direct school children to join the protests in support of the people of Kashmir, but that too failed to gather any steam. Authorities restricted traffic and blocked roads in view of the protests.

All such moves greatly inconvenienced hundreds of Pakistanis as their daily lives were hampered.

Pakistani journalist Naila Inayat tweeted a video showing a group of people in Lahore trying to stop vehicles during the 'peaceful protest'.

"Lahore, Lahore aye ," the scribe tweeted the post with a cat smiley.

In another post, Inayat tweeted a video which showed people arguing with security officials over blocking of traffic for the 'protest'. "One agitated man asks what's the point of stopping the people when "Modi toh upar se guzar jayega," the journalist tweeted.

The failure of the protests has left Pakistan red-faced even as it continues its pursuit of raking up the Kashmir issue in international foras.

In a recent televised address, Khan said his country will go to any extent for Kashmir and asserted that Islamabad would not be afraid of using its nuclear powers for Kashmir.

Pakistan is rattled by the Indian government's move to strip the special status accorded to Jammu and Kashmir under Article 370 and has found itself completely isolated despite desperate attempts aimed at internationalising the issue.

India has also repeatedly maintained that its decision on Kashmir is strictly an internal matter and also advised Pakistan to accept the reality.

Ever since Jammu and Kashmir was stripped of its special status, Islamabad has downgraded bilateral relations with New Delhi by suspending trade, partially closing its airspace, banning of screening Indian cinemas and halting Samjhauta and Thar Express train services.

Instead of addressing pressing issues like struggling economy, rising inflation and poverty, Pakistanis have been concentrating more on Kashmir, vowing to stand in "solidarity" with the Kashmiris till the region attains "freedom".

Apart from spewing venom against India, Pakistan has not learnt its lessons and continues its nefarious and diabolic propaganda by openly supporting 'jihad' against the neighbouring country, despite facing massive international pressure over tackling terrorism.

Despite being snubbed by the international community, Pakistan is now looking forward to raising the Kashmir issue during the United Nations General Assembly meeting in New York next month.