Donald Trump was giving an address to the Air Force personnel at the Osan Air Base in Pyeongtaek on Sunday. 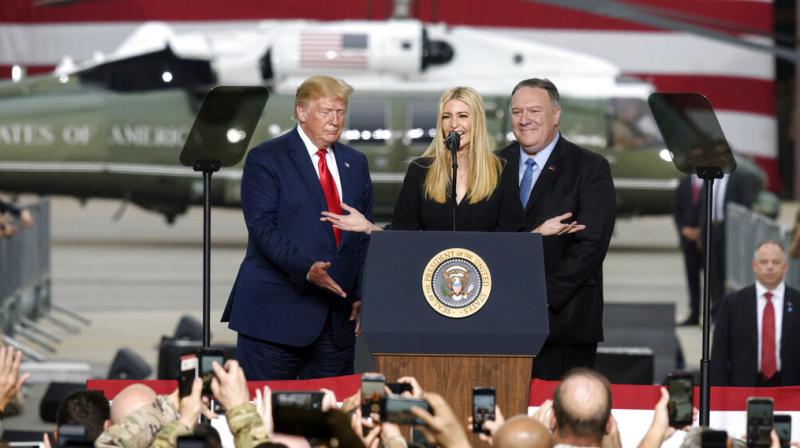 'What a beautiful couple,' he quipped before his audience of Air Force personnel, referring to Ivanka Trump and Pompeo. (Photo: AP)

Pyeongtaek: US President Donald Trump leaves no opportunity to make a comment that raises a several eyebrows. Trump did it again today as he invited his daughter, Ivanka Trump, and Secretary of State Mike Pompeo to the stage while visiting the Osan Air Base in Pyeongtaek, a region just south of South Korean capital Seoul, after creating history meeting with Supreme Leader of North Korea, Kim Jong-un - the first US President to have ever done so.

That wasn't just it. "What a beautiful couple," he quipped before his audience of Air Force personnel, referring to Ivanka Trump and Pompeo.

#WATCH South Korea: US President Donald Trump called his daughter Ivanka Trump & Secretary of State Mike Pompeo on stage, referring to them as "A beautiful couple, beauty and the beast" at the Osan Air Base in Pyeongtaek, earlier today. pic.twitter.com/l0aWiNxLBL

"It's a great day for the world and it's an honour for me to be here," Trump said. "A lot of great things are happening."

As they sat down for discussions, Kim Jong Un said their "handshake of peace" in a location that was "the symbol of the division of north and south" showed that they "are willing to put the past behind" them.

The impromptu meeting in the Demilitarized Zone -- after Trump issued an invitation on Twitter two days ago -- came at a time when negotiations between Pyongyang and Washington had hit a deadlock.