Meanwhile, giving a guarded response, Trump says US 'we will take care of it' and it is 'a situation that we will handle' 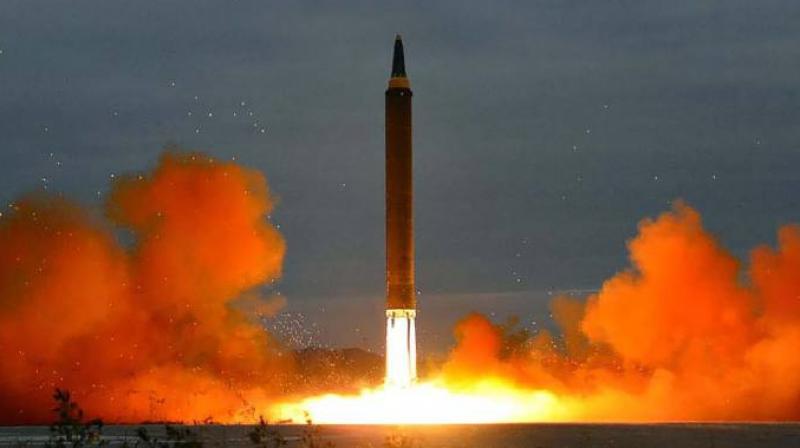 In Picture: An earlier North Korean launch of an intermediate-range strategic ballistic rocket at an undisclosed location near Pyongyang in late August. (Photo: AFP)

Seoul: North Korea test fired what appeared to be an intercontinental ballistic missile (ICBM) on Wednesday, in a major challenge to US President Donald Trump after he slapped fresh sanctions on Pyongyang and declared it a state sponsor of terrorism.

It was the nuclear-armed North's first ballistic test in more than two months and an initial assessment by the Pentagon said it was an ICBM that flew about 1,000 kilometers (620 miles) before splashing down within Japan's maritime Economic Exclusion Zone.

Trump, who has previously threatened North Korea with "fire and fury," was guarded in his immediate response, as the UN Security Council agreed to convene an emergency session to discuss the latest provocation.

"I will only tell you that we will take care of it," Trump said at the White House.

"It is a situation that we will handle," he added, without elaborating.

Prior to Wednesday's launch, the North's last missile test was on September 15 and the subsequent pause had prompted some speculation about whether North Korea might be willing to embrace a negotiated solution to the nuclear standoff.

Trump insisted there would be no change to his administration's "maximum pressure campaign" which has sought to curb Pyongyang's nuclear weapons programme with tightened sanctions backed by dire warnings of massive retaliation in the event of any attack.

But his secretary of state, Rex Tillerson, also stressed that diplomatic options remained "viable and open."

It was the North's third successful test of an ICBM that is seen as having the range to reach the mainland United States.

While Pyongyang has yet to master the re-entry technology required to bring a warhead back through the Earth's atmosphere, experts say it is on the threshold of developing a working nuclear strike capability against US cities.

Tensions over the North's weapons programme peaked after Pyongyang conducted its sixth and most powerful nuclear test in September and then fired an intermediate-range missile over Japan.

US Defense Secretary Jim Mattis said Wednesday's test went higher than ever before and was a step toward North Korea building missiles that can "threaten everywhere in the world, basically."

There was no immediate reaction from China, the North's sole ally and economic lifeline, which has come under repeated US pressure to do more to rein in Pyongyang's nuclear ambitions.

China has pushed for a "dual track approach" to the crisis which would see the United States freeze its military drills in South Korea while North Korea would halt its weapons programmes.

US President Donald Trump also declared North Korea a state sponsor of terrorism, a spot on a US blacklist the country had shed nearly a decade ago. But the North remained defiant, vowing to continue building up its nuclear force and warning that sanctions would never succeed. It also slammed Washington for behaving like an "international judge" and said the terror listing was "clearly an absurdity and a mockery to world peace and security".

Drumming up support for a tough stance against North Korea's nuclear weapons ambitions was the main focus of a marathon Asian tour undertaken by Trump earlier in November. But the US administration has kept the door open to dialogue with Pyongyang and Trump has even said he would be willing, in the right circumstances, to sit down with North Korean leader Kim Jong-Un.

North Korea has made significant progress in its atomic and missile technology under Kim, who took power after the death of his father and longtime ruler, Kim Jong-Il, in 2011. Since then he has overseen four of the country's six nuclear tests and hailed its nuclear weapons as a "treasured sword" to protect itself from potential invasion by the US "imperialist enemy."