President Donald Trump made a very strong commitment that the United States is with Japan 100 percent, Abe quoted Trump as saying. 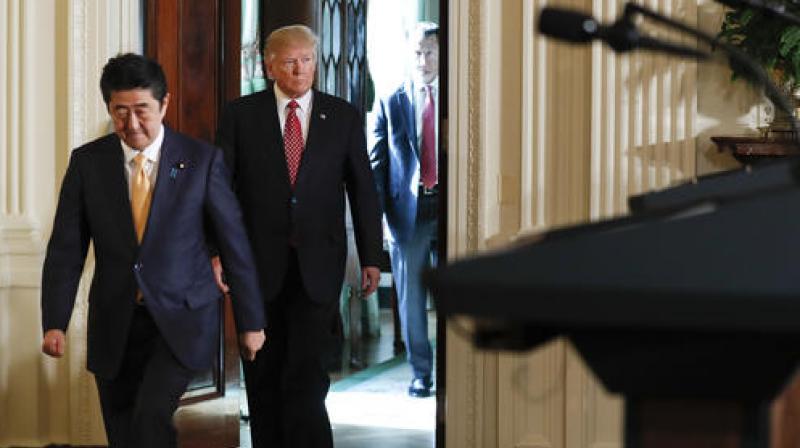 The sanctions are aimed at disrupting the flow of cash funding North Korean weapons programmes, which are in violation of United Nations resolutions. (Photo: File)

Tokyo: Japanese Prime Minister Shinzo Abe on Tuesday said that he and US President Donald Trump agreed to hike pressure on North Korea after it launched a ballistic missile over Japan, in Pyongyang's most serious provocation in years.

"We must immediately hold an emergency meeting at the United Nations, and further strengthen pressure against North Korea," Abe told reporters after a 40-minute phone call with Trump.

"Increasing pressure Japan and the United States are in complete agreement about this," Abe added, without elaborating on proposed measures. He added that Trump who has been embroiled in an escalating war of words with Pyongyang over its weapons development said Washington would stand by its ally Japan.

"President Trump made a very strong commitment that the United States is with Japan 100 percent," Abe quoted Trump as saying."We will cooperate among Japan, the US and South Korea.

We will also reach out to China, Russia and the international community and apply strong pressure on North Korea to change their policy." Last week, Japan said it would impose fresh sanctions on North Korea by freezing the assets of Chinese and Namibian firms doing business with the nuclear-armed state.

The move against a half dozen organisations and a couple of individuals comes days after Washington expanded its own punitive measures against Chinese and Russian firms, as well as people linked to Pyongyang over its weapons development.

The sanctions are aimed at disrupting the flow of cash funding North Korean weapons programmes, which are in violation of United Nations resolutions. Japan's top government spokesman said the missile flew over the country's northernmost island Hokkaido and then fell into the Pacific, some 1,180 kilometres (733 miles) east of the coast.

"So far no fallen objects have been confirmed to have fallen inside Japanese territory," Chief Cabinet Secretary Yoshihide Suga told an emergency press briefing. "There is no report of damage to aircrafts and vessels" in the area, he added.