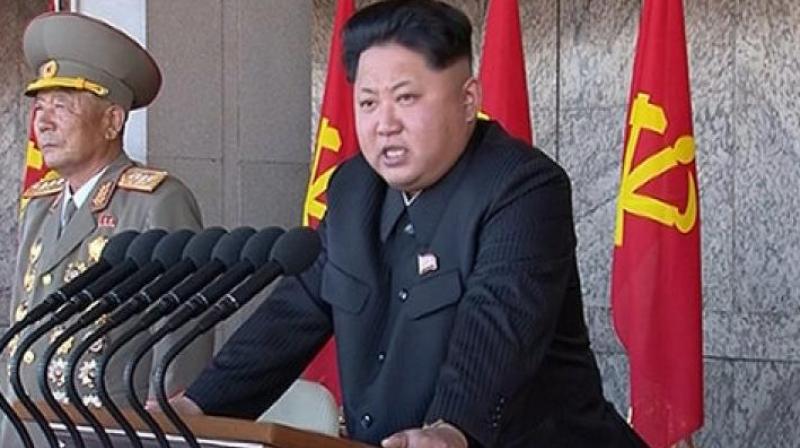 Kim said Friday's test demonstrated the North's ability to launch "at any place and time," the Korean Central News Agency reported, adding "the leader said proudly the test also confirmed all the US mainland is within our striking range."

The report said the test confirmed the missile's nuclear detonation control mechanism operated normally and that the warhead could endure the intense heat of re-entering the atmosphere.

With its second ICBM test this month, North Korea is doubling down on its threat to develop nuclear-strike capability against the US mainland in the face of severe warnings from President Donald Trump.

The US leader denounced the launch as a "reckless and dangerous" action and rejected Pyongyang's claims that such tests helped ensure its security.

"By threatening the world, these weapons and tests further isolate North Korea, weaken its economy, and deprive its people," Trump said in a statement.

"The United States will take all necessary steps to ensure the security of the American homeland and protect our allies in the region."

"We assess that this missile was an intercontinental ballistic missile," Pentagon spokesman Navy Captain Jeff Davis said, adding that the projectile travelled about 1,000 kilometres (620 miles) before splashing down in the Sea of Japan.

However, the Russian military said it appeared to be a "medium-range" ballistic missile.

The launch came a day after North Korea celebrated what it calls "Victory Day" -- the anniversary of the end of the 1950-53 Korean War. Pyongyang regularly times its missile tests to coincide with symbolic dates.

In Seoul and Tokyo, the governments convened meetings of their national security councils.

And the US and South Korean militaries began conducting a live-fire exercise using surface-to-surface missiles in response to the latest test, the US army said.

- 'Time for Trump to focus' -
Joel Wit, a senior fellow at the US-Korea Institute at Johns Hopkins University and an expert on the North's nuclear weapons programme, said Friday's launch confirmed time was running out for Washington to find a way out of a pressing security crisis.

"Another North Korean test of what appears to be a missile that can reach the United States further emphasises the need for the Trump administration to focus like a laser on this increasingly dangerous situation," Wit said on the institute's 38 North website.

US military and South Korean intelligence officials had in recent days warned that North Korea appeared to be prepping another missile test -- likely of an ICBM.

The ICBM test on July 4 had triggered global alarm, with experts saying the missile had a theoretical range to reach Alaska.

Kim Jong-Un, who also personally oversaw that launch on America's Independence Day, described it as a gift to the "American bastards."

The United States instigated a push at the United Nations for tougher measures against Pyongyang, with Trump saying he was considering a "pretty severe" response.

North Korea's accelerated drive towards a credible nuclear strike capability poses a thorny policy challenge for Trump, who is at loggerheads with Beijing over how to handle Kim Jong-Un's regime.

"It's clear Kim Jong-Un remains undeterred by the threat of tightened sanctions, and is not listening to its one major ally, China. The longer the world waits to deal with North Korea, the more advanced Pyongyang's arsenal will become," said Jean Lee at the Wilson Center thinktank.

Trump has repeatedly urged Beijing to rein in its recalcitrant neighbour, but Beijing insists dialogue is the only practical way forward.

There remain doubts whether the North can miniaturise a nuclear weapon to fit a missile nose cone, or if it has mastered the technology needed for the projectile to survive re-entry into the Earth's atmosphere.

But since Kim came to power there has been a series of technical advances, including three nuclear tests and a string of missile launches.

France on Friday called on fellow members of the UN Security Council to swiftly adopt "strong and additional sanctions" against Pyongyang.

- 'Frustrating' -
Reacting to the launch, UN spokesman Farhad Haq said it was "frustrating" that the secretary general's calls for all sides to de-escalate tensions on the Korean peninsula had gone unheeded.

In an apparent reference to China, Haq said it was important for all parties to "use their particular influence to help resolve this."

In all, six sets of UN sanctions have been imposed on North Korea since it first tested an atomic device in 2006, but two resolutions adopted last year significantly toughened the sanctions regime.

Meanwhile, the US military is preparing to conduct another test of a missile-intercept system in Alaska, perhaps as soon as Saturday.