Jim Mattis says US goal is ‘not war’ with North Korea

The remark came a day after Mr Mattis had said that Washington was "not rushing to war" and was looking for "peaceful resolution". 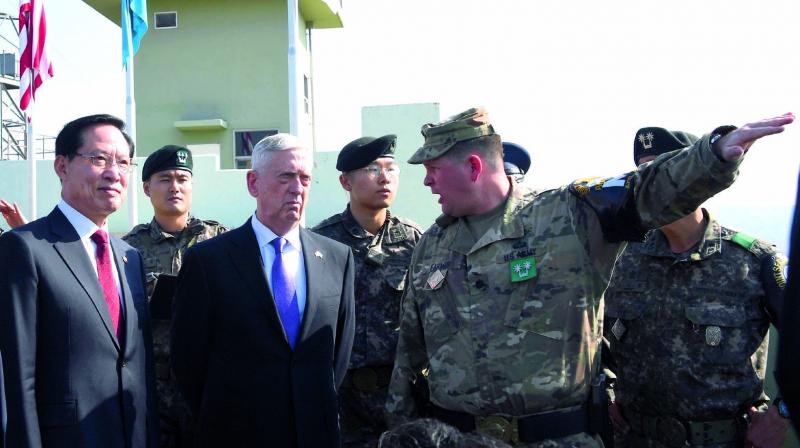 US defence secretary Jim Mattis and South Korean defence minister Song Young-moo visit Observation Post Ouellette in Paju near the truce village of Panmunjom in the demilitarised zone on the border between North and South Korea on Friday. (Photo: AP)

Seoul: Washington's goal "is not war" as it seeks to ease high military tension with Pyongyang, US secretary of defence Jim Mattis said on Friday, standing at the heavily-fortified border between the two Koreas.

Tension has flared on the Korean peninsula as US President Donald Trump and the North's ruler Kim Jong-un have traded threats of war and personal insults that sparked global alarm. But Mr Mattis, who visited the tense demilitarised zone during a trip to South Korea, said the US was committed to a "diplomatic solution".

"As the US secretary of state Mr Tillerson made clear, our goal is not war but rather the complete, verifiable and irreversible denuclearisation of the Korean peninsula," he said in the truce village of Panmunjom.

Mr Mattis also stressed he and his South Korean counterpart Song Young-moo had "made clear our mutual commitment to a diplomatic solution to address North Korea's reckless, outlaw behaviour". The remark came a day after Mr Mattis had said that Washington was "not rushing to war" and was looking for "peaceful resolution".

He is set to hold annual defence talks with Song on Saturday during the two-day trip, which comes ahead of a planned trip by Trump to the South — a key US ally in Asia — next month.

Mr Trump is set to visit Seoul from November 7 to 8. The isolated North carried out its sixth nuclear test last month and has launched several missiles in recent months potentially capable of reaching the mainland of its "imperialist enemy" the US.