Pakistan objects to supply of US armed drones to India

Pak Foreign Office spokesman said 'extra-regional powers' should be mindful of actions that can mar strategic stability in South Asia. 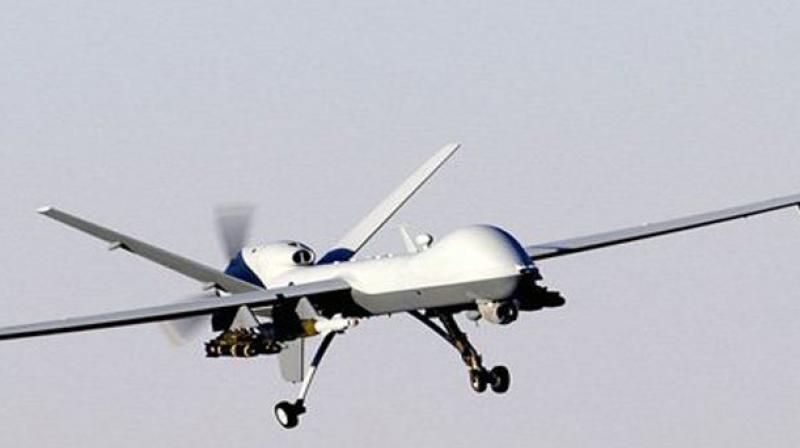 Pakistan Foreign Office spokesman Nafees Zakaria demanded that any transfer of armed drones should also be closely examined in the context of the guidelines of the multilateral export control regimes, including the Missile Technology Control Regime, which place certain limitations on such transfers. (Photo: File | Representational)

Islamabad: Pakistan on Friday opposed supply of armed drones by the US to India, warning that it could increase the chances of “military misadventures" leading to a conflict in the region.

The remarks by the Foreign Office spokesman came days after a senior Trump administration official said that the US was "considering" India's request for armed drones for its air force's modernisation drive. "Use of armed drones can lower the threshold for conflict, since it can encourage military misadventures, especially in the backdrop of irresponsible discourse about limited military operations below the strategic threshold," Foreign Office spokesman Nafees Zakaria said in Islamabad.

Zakaria said that Pakistan has consistently maintained that preserving regional stability should be the fundamental consideration in any international arms transfer.

He said "extra-regional powers" should be mindful of such actions, which can undermine strategic stability in South Asia. He demanded that any transfer of armed drones should also be closely examined in the context of the guidelines of the multilateral export control regimes, including the Missile Technology Control Regime (MTCR), which place certain limitations on such transfers.

Zakaria said that even if such transfers are below the prescribed thresholds, they definitely violate the spirit of the control regimes, which are aimed at controlling the proliferation of destabilising weapon systems, which can threaten regional peace and stability.

"We hope that the members of MTCR and other export control regimes fully understand their responsibility in not letting any country’s membership of such groupings constitute a carte blanche for proliferation of destabilising weapon systems," he said.

Talking about Secretary of State Rex Tillerson's recent visit to Islamabad, he claimed that the US side admitted that Pakistan had two troubled borders and the South Asia Strategy would address these issues.

To a question about "Indo-US coziness", the spokesman said Pakistan was not against any bilateral relationship between them but "it should not be based on agenda of containing China or threatening Pakistan."

"We are concerned with the role US is giving to India in the region. It will only aggravate the situation and endanger the peace and stability in this part of the world," he said. Indian actions and policies, as you are aware, have been a cause of serious concern for many of its neighbours over several issues. We believe that countries should resolve their issues through engagement and dialogue," he said.

When asked whether the Pakistani leaders raised the issue of India's alleged interference in Pakistan during their talks with Tillerson, Zakaria responded by saying that Pakistan side "did raise the issue of Indian involvement in terrorism in Pakistan, and also mentioned the subversive activities carried out by RAW using terrorists based in Afghanistan."

"We also raised the issue of ceasefire violations by the Indian forces along the Line of Control and Working Boundary...We also highlighted plight of Kashmiris," he said, adding that Pakistan would continue to extend moral, diplomatic and political support to the Kashmir cause. "We call for the resolution of the Kashmir dispute in accordance with relevant UNSC Resolutions," he added.