North Korea, which has threatened to “sink” Japan and fired two missiles over its northern islands. 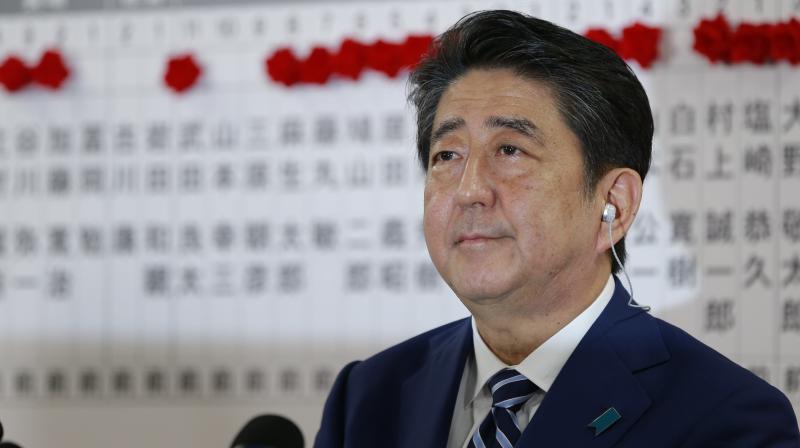 Tokyo: Japanese Prime Minister Shinzo Abe pledged on Monday to work with the US, China and Russia to contain North Korea’s nuclear threat with “strong, resolute diplomacy”, as he “humbly” accepted his landslide victory in a snap election.

Fresh from clinching a two-thirds “super-majority” that enables the nationalist Premier to realise his dream of revising Japan’s pacifist Constitution, Mr Abe vowed to forge a “national consensus” on the divisive issue.

Addressing reporters on his election win, Mr Abe said he would “confirm close co-operation” on North Korea with Donald Trump when the US President visits Japan next month and then discuss the issue with the Chinese and Russian leaders.

“I have renewed my determination to secure people’s lives and peaceful living, no matter what,” said the 63-year-old.

North Korea, which has threatened to “sink” Japan and fired two missiles over its northern islands, dominated the 12-day election campaign that Mr Abe eventually won comfortably. “We will solve North Korea’s missile, nuclear and abduction issues with strong, resolute diplomacy,” he said in reference to the abduction of Japanese by Pyongyang in the 1970s and 1980s.

Mr Abe’s conservative coalition was on track to win at least 313 seats with only a handful left to call, according to public broadcaster NHK, giving him the coveted two-thirds majority in the Lower House of Parliament.

He is now on course to become Japan’s longest-serving Premier, winning a fresh term at the helm of the world’s third-biggest economy and key US regional ally.

“I focused on the national defence issue, because I am concerned about North Korea. So I chose the party that will work firmly on this issue,” one voter, 66-year-old pensioner Tsuyoshi Ushijima, said. However, while local media acknowledged what was described as a landslide victory, many attributed Mr Abe’s win to a weak and ineffective opposition and urged caution.

“The voters didn’t think the opposition parties were capable of running a government... they chose Prime Minister Abe, who is at least better, even if they had some concerns about the ruling coalition,” said the Nikkei daily.

The Asahi newspaper said: “The Abe brand is not as strong as it was before. There are some signs that voters are seeking a change in the situation whereby Mr Abe is the only decent option.”

According to an exit poll by Kyodo News on Sunday, 51% of voters said they do not trust Mr Abe with 44% saying they did.

Turnout was expected to be only a fraction higher than the all-time low in the 2014 election.