Coronavirus cases surge in US, but slow in China, South Korea 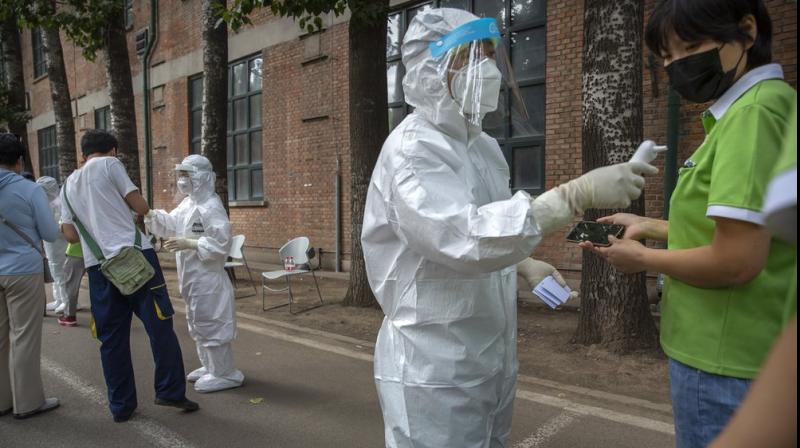 Workers in protective suits take the temperatures of people at a COVID-19 testing site for those who were potentially exposed to the coronavirus outbreak at a wholesale food market in Beijing. (AP Photo)

BANGKOK: The world saw the largest daily increases yet in coronavirus cases over the weekend, while infections slowed in China and South Korea, suggesting progress in stemming their newest outbreaks.

Despite clear progress in containing the virus in some regions, especially those that saw early outbreaks, globally the number of new virus cases has soared in recent days. In Brazil, Iraq, India and the United States, hospitals are scrambling to cope.

Nearly 9 million people have been infected and more than 468,000 people have died, according to figures compiled by Johns Hopkins University. Experts say the actual numbers are much higher, given limits to testing and the presumed large share of asymptomatic cases.

Late Sunday, the World Health Organization reported the largest single-day increase in coronavirus cases by its count, at more than 183,000 new cases in the latest 24 hours. Brazil tallied 54,771 and the U.S. was next at 36,617, the UN health agency said. India reported more than 15,400.

Experts say rising case counts reflect multiple factors including more testing and spreading infections. More than two-thirds of the new deaths were reported in the Americas.

Still, in East Asia there were signs of progress, as South Korea reported 17 new cases, the first time its daily increase fell to under 20 in nearly a month.

The country has been reporting 40 to 50 new cases per day in the past few weeks, amid increased public activity, eased attitudes on social distancing and an uptick in imported cases.

A rise in the number of such cases arriving from South Asia prompted a halt to new visas for travelers from Pakistan and Bangladesh.

Elsewhere in Asia, Beijing’s increase was in single digits for the first time in eight days. It reported nine cases.

Even in New Zealand, which earlier said it had eliminated local transmissions of the virus, two new cases were reported Monday among infected people arriving from India and Pakistan. The country of 5 million people now has nine active cases after having none at all earlier this month.

Many remain anxious that community transmission could resume, especially after health officials admitted having mistakenly let two women who arrived from London leave quarantine before they were tested to visit a dying parent. The women later tested positive and have since isolated themselves.

In the United States, experts say the resurgence in infections there is not a so-called “second wave” but a continuation of the first wave of outbreaks as the number of cases plateaus.