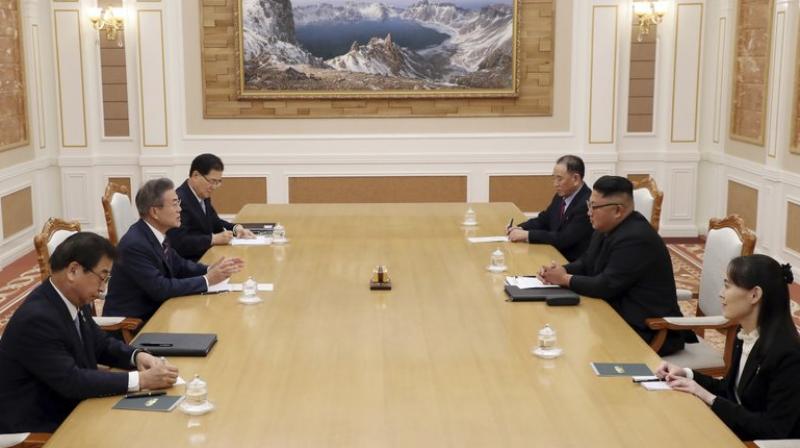 Seoul: South Korea's president and the North's leader Kim Jong Un drove together through the streets of Pyongyang Tuesday past thousands of cheering citizens before opening a summit where Moon Jae-in will seek to reboot stalled denuclearisation talks between his hosts and the United States.

The North's unique brand of choreographed mass adulation was on full display as hundreds of people waved North Korean flags and another depicting an undivided peninsula -- while the South's own emblem was only visible on Moon's Boeing 747 aircraft.

Thousands of residents, holding bouquets and chanting in unison "Reunification of the country!", lined the streets as Kim and Moon rode through the city in an open-topped vehicle, passing the Kumsusan Palace where Kim's predecessors -- his father and grandfather -- lie in state.

"I am acutely aware of the weight that we bear," Moon told Kim as they opened two hours of formal talks at the headquarters of the ruling Workers' Party, adding that he felt a "heavy responsibility".

"The entire world is watching and I would like to show the outcome of peace and prosperity to the people around the globe," said Moon - whose own parents fled the North during the Korean War that left the peninsula divided by the impenetrable Demilitarized Zone (DMZ) and technically in a state of conflict.

Addressing his visitor in respectful terms, Kim praised him for brokering his historic Singapore summit with US President Donald Trump in June, adding: "This has led to stability in the region and I expect more progress." At the time, the North Korean leader declared his backing for the denuclearisation of the peninsula. But no details were agreed and Washington and Pyongyang have since sparred over what that means and how it will be achieved.

The US is pressing for the North's "final, fully verified denuclearisation", while Pyongyang wants a formal declaration that the 1950-53 Korean War is over and has condemned "gangster-like" demands for it to give up its weapons unilaterally.

A commentary in the Rodong Sinmun, the mouthpiece of the North's ruling party, repeated the criticism Tuesday, saying Washington was "totally to blame" for the deadlock and adding: "The US is stubbornly insisting on the theory of 'dismantlement of nukes first'."

Moon will hold another round of formal talks with Kim on Wednesday as he tries to convince him to make substantive steps towards disarmament that he can present to Trump, whom Moon is due to meet later this month on the sidelines of the UN General Assembly in New York.

"I wish this will be a summit that produces abundant results as a gift to the 80 million people of this nation for Chuseok," the South Korean leader said, referring to the traditional holiday that falls on Monday.

The dovish South Korean president is looking to tie the inter-Korean process and the US-Northern talks closer together to reduce the threat of a devastating conflict on the peninsula. At the same time Kim will look to secure closer inter-Korean co-operation as Seoul and Washington move at increasingly different speeds in their approaches to Pyongyang.

The meeting "will probably generate rosy headlines but do little to accelerate efforts to denuclearise North Korea", Eurasia Group said in a note. Kim would focus on "areas that promise economic benefits for the North", it added.

"Progressives inside and outside Moon's government will have strong incentives to inflate the summit's accomplishments, initially obscuring what will likely be a lack of major deliverables."

There have been many previous rounds of negotiations with the North, but deals have subsequently fallen apart -- Wednesday will mark 13 years to the day that Pyongyang agreed to abandon all of its nuclear weapons and return to the Nuclear Non-Proliferation Treaty.

It has since carried out six nuclear tests and launched intercontinental ballistic missiles capable of reaching anywhere on the US mainland. Moon's three-day visit is the first by a South Korean president to Pyongyang in a decade - after Kim Dae-jung in 2000 and Moon's mentor Roh Moo-hyun in 2007.

It is also the two leaders' third meeting this year, after previous summits in April and May in the DMZ. The South Korean president -- whose poll ratings have fallen in the face of economic difficulties -- was accompanied by business tycoons including Samsung heir Lee Jae-yong and the vice chairman of Hyundai Motor.

Moon has been pushing inter-Korean engagement, which is complicated by the multiple international sanctions against the North. South Korean media have urged caution, calling for substantial progress towards denuclearisation first. "Quite a number of people are now fed up with the surprise events between the leaders," the conservative Chosun Ilbo newspaper said in an editorial Tuesday.

"President Moon must head to Pyongyang with the resolve that the first, second, third agenda of this summit is denuclearisation."