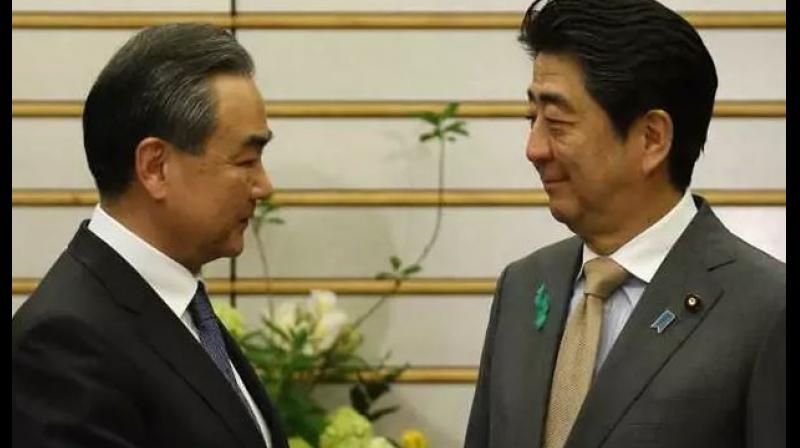 Welcoming Chinese Foreign Minister Wang Yi for a rare three-day visit, Japanese Premier Shinzo Abe called for warmer relations between the two countries and said they should work together on North Korea.

Abe said he would be visiting the United States for talks with President Donald Trump to seek the "complete and irreversible denuclearisation" of North Korea and added "we want to co-operate with China."

After meeting Abe, Wang told reporters that Beijing wanted to place "Sino-Japanese cooperation at a new starting point" and cooperate on energy, financial and environmental issues.

Tokyo is battling to stay relevant amid a string of summits on North Korea's nuclear programme in which Beijing is likely to be a major player.

Abe said this would be held "after Golden Week", a series of national holidays that ends on May 6.

Bilateral visits by Abe and Chinese President Xi Jinping are also being planned.

China demonstrated its significant influence over its reclusive ally when Xi hosted the North's leader Kim Jong-un and his wife in Beijing last month.

With Moon and Trump also preparing to meet Kim, reported efforts by Japan to reach out to Pyongyang have gone ignored.

Wang said he and Abe spoke about North Korea.

"At present, the nuclear issue on the peninsula has clearly eased from a situation of a crippling crisis and has returned to the direction of denuclearisation," Wang said, reiterating Beijing's call for a political and peaceful settlement.

Meanwhile, Japan and China are targets of Trump's steel and aluminium tariffs, with Beijing also targeted with a further heavy levy.

Japan's Foreign Minister Taro Kono and Wang did not specifically mention the proposed US trade policies, as its implementation and consequences were still unclear.

But they noted the global economy has dramatically changed during the eight years the bilateral dialogue has stalled.

"We must have fresh perspectives and think about ways of cooperation and coordination," said Kono.

"We share the common understanding that starting of a trade war would have a significant impact on the prosperity of the global economy."

Following his meeting with Abe, Wang said Japan understands the importance of safeguarding the rules of the World Trade Organization.

"The consensus reached by both parties is that facing the rise of protectionism, we have all promised to use our actions to safeguard the global free trade system with the WTO as its core and jointly build a more open world economy," Wang said.