North Korea adds to the ‘sum of all fears’ 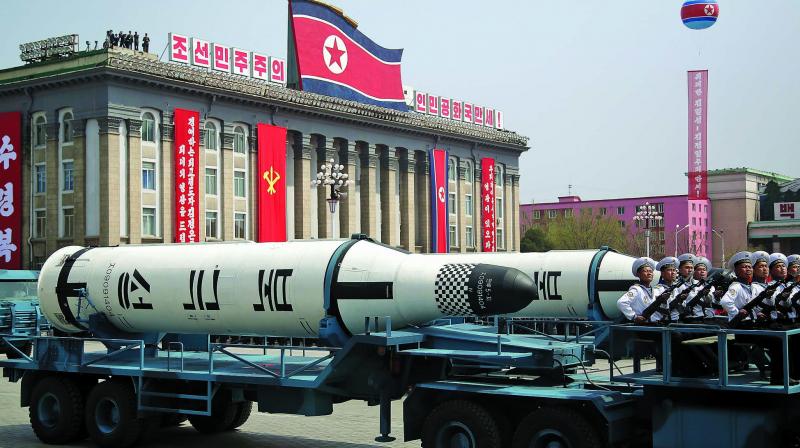 An SLBM is paraded across the Kim Il-sung Square.

Pyongyang: North Korea warned the United States of a nuclear war on Saturday as it unveiled what analysts said could be a new intercontinental ballistic missile (ICBM) at a giant military parade in Pyongyang to mark the 105th anniversary of the country’s founder Kim Il-sung.

Choe Ryong-hae, considered by analysts as the North’s No. 2 official, addressed the packed Kim Il-Sung Square with a characteristically bellicose warning to the US as nearly 60 missiles were paraded.

“If the United States wages reckless provocation against us, our revolutionary power will instantly counter with annihilating strike, and we will respond to full-out war with full-out war and to nuclear war with our style of nuclear strike warfare,” Choe said adding that US President Donald Trump is guilty of “creating a war-like situation” on the Korean Peninsula by dispatching forces to the region.

North Korean leader Kim Jong-un, looking relaxed in a dark suit and laughing with aides, oversaw the festivities on the “Day of the Sun”, which celebrates the 1912 birthday of his late grandfather Kim Il-sung.

The North saw the toppling of Saddam Hussein in Iraq and Muammar Gaddafi in Libya—neither of whom had nuclear weapons as proof of the weapons’ power. “It will be the largest of miscalculations if the United States treats us like Iraq and Libya, which are living out miserable fates as victims of aggression, and Syria, which didn’t respond immediately even after it was attacked,” the general staff of the North Korean Army said on Thursday, according to the official Korean Central News Agency.

The North’ vice-foreign minister had told The Associated Press in an exclusive interview on Thursday that Trump’s tweets have inflamed tensions. “Trump is always making provocations with his aggressive words,” Han Song-ryol said.

The parade displayed devices in increasing order of range and it was four huge green missiles rolled out on articulated trailers towards the end that caught the attention of military specialists. “This appears to be a new ICBM,” Yonhap news agency quoted a South Korean military official as saying A US military official said that America doesn’t intend to use military force against Pyon-gyang.