North Korea has been seeking a lifting of punishing sanctions, but US has insisted Kim Jong Un must dismantle his nuclear weapons programme. 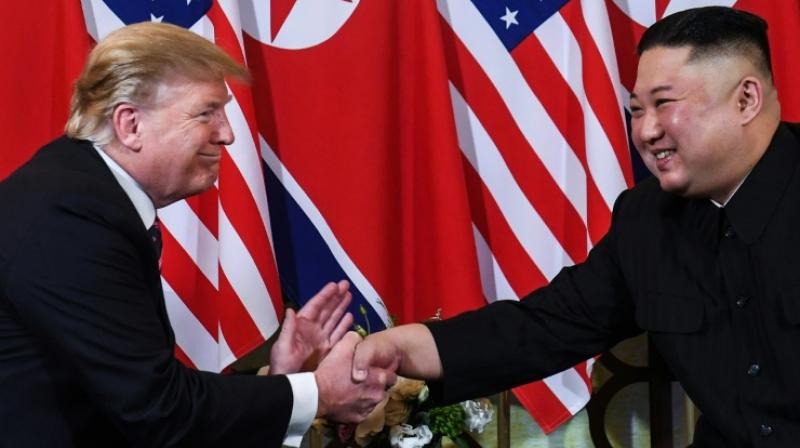 A spokeswoman for the US State Department said Trump remained committed to making progress on agreements he reached with Kim Jong Un at a first summit in Singapore in June last year, namely 'transformed relations, building lasting peace, and complete denuclearisation.' (Photo: File)

Seoul: North Korea said on Thursday it had turned down a US offer for fresh talks, saying it was not interested in more talks merely aimed at "appeasing us" ahead of a year-end deadline Pyongyang has set for Washington to show more flexibility in negotiations.

Kim and Biegun met last month in the Swedish capital for the first time since US President Donald Trump and North Korean leader Kim Jong Un agreed in June to re-open negotiations that have been stalled since a failed summit in Vietnam in February.

But the Stockholm meeting fell apart, with Kim Myong Gil saying the US side had failed to present a new approach.

"If the negotiated solution of issues is possible, we are ready to meet with the US at any place and any time," Kim Myong Gil said.

However, he said Biegun's proposal had a "sinister aim of appeasing us in a bid to pass with ease" Pyongyang's year-end deadline. "We have no willingness to have such negotiations."

North Korea has been seeking a lifting of punishing sanctions, but the United States has insisted Kim Jong Un must dismantle his nuclear weapons programme first.

A spokeswoman for the US State Department said Trump remained committed to making progress on agreements he reached with Kim Jong Un at a first summit in Singapore in June last year, namely "transformed relations, building lasting peace, and complete denuclearisation."

After the collapse of the Hanoi summit, in April, Kim Jong Un set a year-end deadline for Washington to show more flexibility, raising concerns that North Korea could return to nuclear bomb and long-range missile testing suspended since 2017. Trump has repeatedly held up this freeze in such testing as evidence of progress in his engagement with North Korea.

The latest North Korean statement came as US defence officials were gathering in Seoul for annual meetings amid intensifying threats from North Korea to stop joint military drills.

General Mark Milley, chairman of the US Joint Chiefs of Staff, reaffirmed that Washington was ready to use the "full range" of its capabilities to defend South Korea from any attack.

The United States is also seeking a greater financial contribution from South Korea for hosting American troops, while urging it to revoke its decision to scrap an intelligence-sharing pact with Japan known as GSOMIA, which Washington worries would undermine trilateral cooperation.

Both sides discussed ways to maintain solid defence posture, a joint statement said, even as they have scaled back joint exercises to expedite negotiations with North Korea.

Milley reiterated the "continued commitment to providing extended deterrence", the statement said, a reference to the US nuclear umbrella that North Korea has long objected to.

Trump's insistence Seoul take on a greater share of the cost of the 28,500-strong U.S. military presence as deterrence against North Korea has rattled South Korea. It could also set a precedent for upcoming US negotiations on defence cost-sharing with other allies.

Esper said on Wednesday he was open to changes in US military activity in South Korea if it helped diplomats trying to jump-start stalled talks with North Korea.

Kim Yong Chol, a senior North Korean official who led negotiations in the run-up to the Vietnam summit, said in a statement carried by KCNA late on Thursday that he hoped Esper meant to completely halt the joint drills.

"I assess his comment reflected Trump's thinking and was part of the US side's positive efforts to revive the momentum for talks," he said. "But if ... the hostile provocation against us is carried out, we won't help but respond with shocking punishment that the United States can't afford."

Pyongyang has decried the US-South Korea exercises as hostile, even in their current reduced form. On Wednesday, it threatened to retaliate if the allies go ahead with scheduled drills.