The ties between India and ASEAN have been on an upswing, particularly in the areas of trade and investment. 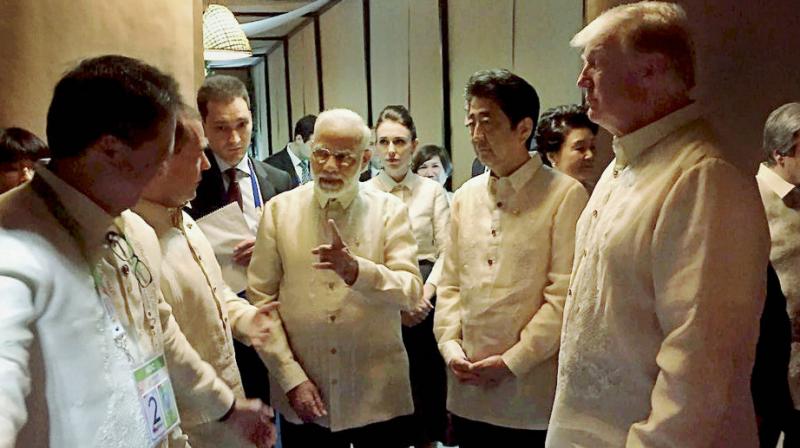 The ASEAN region along with India together comprises combined population of 1.85 billion people, which is one fourth of the global population and their combined GDP has been estimated at over USD 3.8 trillion. (Photo: PTI)

Manila: Prime Minister Narendra Modi on Tuesday invited leaders of 10 South East Asian countries to attend the Republic Day celebrations as well as participate at a commemorative summit marking 25th anniversary of India's ties with the bloc and they accepted it.

In his address at the ASEAN-India Summit, Modi said he was looking forward to a "befitting culmination of the commemorative year and receiving you" at the India-ASEAN Special Commemorative Summit on January 25 next year in New Delhi.

He said 1.25 billion people of India are keen to welcome the ASEAN leaders as the Chief Guests at India's 69th Republic Day celebrations.

Saran said a number of events have been planned in the run up to the commemorative summit including an India-ASEAN connectivity summit on December 11 and 12 and a business summit in January next year.

She said the sense in the ASEAN-India Summit was that there was huge potential for further expansion of cooperation between the two sides on a range of areas. There was a major focus on improving connectivity between ASEAN and India.

Referring to the musical play, which was based on epic Ramayana, and presented at the ASEAN opening ceremony, the Cambodian leadership at the summit suggested that ASEAN troupes should be invited for their own rendition of the Ramayana at the commemorative summit in January and the Indian side accepted the proposal.

Saran said India will invite groups from all the 10 ASEAN countries for performance on theme based on Ramayana as it reflected India's civilisational links with the ASEAN nations.

The ties between India and ASEAN have been on an upswing, particularly in the areas of trade and investment.

The ASEAN region along with India together comprises combined population of 1.85 billion people, which is one fourth of the global population and their combined GDP has been estimated at over USD 3.8 trillion.

Investment from ASEAN to India has been over USD 70 billion in the last 17 years accounting for more than 17 per cent of India's total FDI.

India's investment in ASEAN during the same period has been more than USD 40 billion.