N Korea said it will 'completely' destroy Punggye-ri test site, in a ceremony scheduled between May 23-25 in front of invited foreign media. 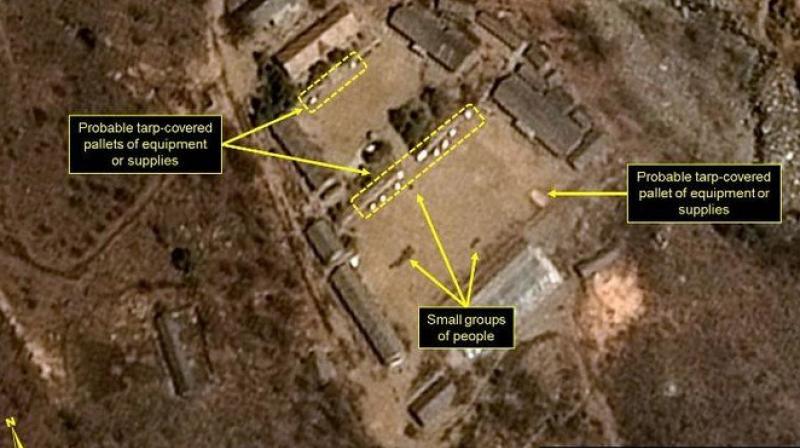 A 2017 satellite image from a French space agency shows the nuclear test site with probable tarp-covered pallets and personnel in the main administrative area. (Photo: AFP)

In a move welcomed by Washington and Seoul, North Korea said at the weekend it will "completely" destroy the Punggye-ri test site, in a ceremony scheduled between May 23-25 in front of invited foreign media.

But no observers from international atomic monitoring agencies have been invited, raising concerns over the openness of the process.

Punggye-ri, in the northeast of the country, has been the site of all six of the North's nuclear tests, the latest and by far the most powerful in September last year, which Pyongyang said was an H-bomb.

North Korea pledged to close the testing ground after Kim last month declared the country's nuclear force complete and said it had no further need for the complex.

The respected 38 North website said Tuesday that satellite images dated May 7 showed "the first definitive evidence that dismantlement of the test site was already well under way".

Several key operational buildings as well as smaller sheds had been razed and rails connecting the tunnels to their waste piles were removed, the monitoring group said.

Excavation of a new tunnel has also been halted since late March, it added.

Images showed preparatory work for the destruction ceremony had also begun, including a newly positioned foundation among the waste piles believed to have been built for the invited journalists.

"It is conceivably for a future camera position to record the closure of the West Portal," the group said.

However no tunnel entrances appear to have been permanently closed and some main buildings are still intact, it added, saying the destruction of those facilities was likely to be carried out in front of the foreign media.

Dialogue brokered by South Korea has seen US-North Korea relations go from trading personal insults and threats of war last year to a summit between Kim and Trump which will be held in Singapore on June 12.

Kim's latest diplomatic overture has seen him hold a summit with the South's President Moon Jae-in and travel twice in less than two months to meet with Chinese leader Xi Jinping.

The two Koreas are due to meet for a high-level meeting on Wednesday to discuss follow-up measures from their summit last month, Seoul's unification ministry said.

Washington is seeking the "complete, verifiable and irreversible denuclearisation" of the North and stresses that verification will be key.

But sceptics warn that Pyongyang has yet to make any public commitment to give up its arsenal, which includes missiles capable of reaching the United States.

The purpose of the new buildings at the Yongbyon Nuclear Scientific Research Centre was unknown, 38 North has said, with "no observable signs that initial reactor operations are imminent".

North Korea blew up a cooling tower at the nuclear facility in 2007 following a deal with the US, but soon restarted the reactor.