The US and South Korean military officials suspect the North might be preparing to launch missiles capable of reaching the US territory. 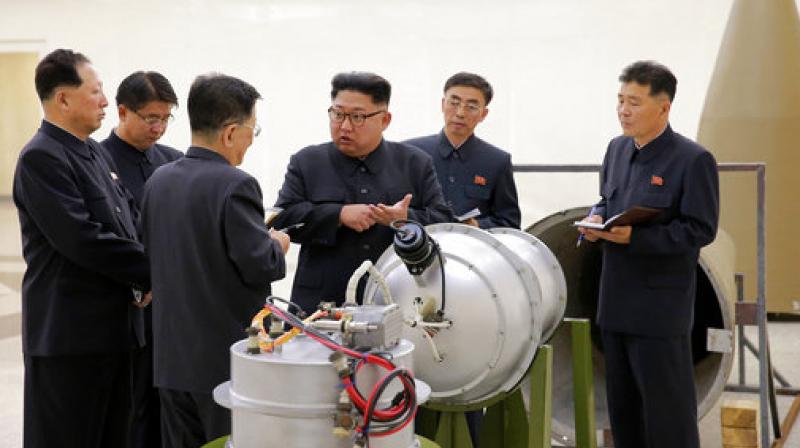 North Korea might be preparing to test a new Hwasong-13 ICBM, that could potentially reach the US West Coast. (Photo: AP)

Seoul: North Korea is believed to be preparing to launch a ballistic missile ahead of an upcoming joint naval drill by the US and South Korea, a news report said on Saturday, citing a government source.

The US navy said yesterday that a US aircraft carrier will lead the drill in the coming week, a fresh show of force against North Korea as tensions soar over the hermit state's weapons programme.

The move will likely rile Pyongyang which has previously responded angrily to joint exercises.

The Donga Ilbo daily, quoting a government source, said satellite pictures show ballistic missiles mounted on launchers being transported out of hangars near Pyongyang and in the North Phyongan Province.

The US and South Korean military officials suspect the North might be preparing to launch missiles capable of reaching the US territory, the newspaper said.

This could be the Hwasong-14 inter-continental ballistic missile (ICBM), whose range could extend to Alaska, or Hwasong-12 intermediate-range missiles which Pyongyang threatened to fire towards the US Pacific territory of Guam in August, the report said.

Another possibility is that the North might be preparing to test a new Hwasong-13 ICBM, it added, that has a longer maximum range than the other two missiles and could potentially reach the US West Coast.

A defence ministry spokesman declined to comment on the report, saying: "We don't comment on any matters of military intelligence". "We are keeping a close watch over the North," he added.

The joint drills led by the USS Ronald Reagan aircraft carrier come after hectic US military hardware movements around the Korean peninsula in recent days.

These follow a flurry of missiles from Pyongyang, which conducted its sixth and most powerful nuclear test last month in defiance of international sanctions.

Yesterday the nuclear-powered USS Michigan submarine arrived at the southern South Korean port of Busan, just days after another nuclear-powered submarine- the USS Tuscon left after a five day visit.

Earlier this week the US flew two supersonic heavy bombers over the Korean peninsula, staging the first night-time joint aviation exercises with Japan and South Korea.

That mission came 17 days after four US F-35B stealth fighter jets and two B-1Bs flew over the peninsula.

Professor Yang Moo-Jin of the University of North Korean Studies said it was "highly likely" that the North could launch missiles in response to next week's joint navy drill.

US President Donald Trump's continued threats of military action against Pyongyang if it does not tame its weapons ambitions have fuelled fears of conflict on the Korean Peninsula.