US, China seek deal to prevent trade-war escalation ahead of tariff deadline

The two economic superpowers have already imposed duties on more than USD 360 billion in two-way trade. 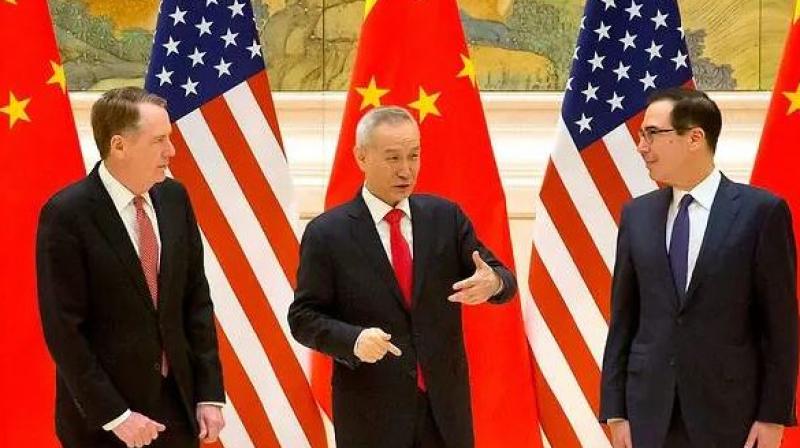 Beijing: US and Chinese negotiators on Thursday kicked off two days of high-level talks that President Donald Trump says could decide whether he escalates the bruising tariff battle between the world's two biggest economies.

Trump indicated this week he was open to extending a trade truce beyond March 1 depending on progress in Beijing. He is considering pushing the deadline back an additional 60 days, Bloomberg News reported, citing sources.

In December he postponed plans to sharply hike tariffs on USD 200 billion of Chinese imports to allow more time for negotiation.

The two economic superpowers have already imposed duties on more than USD 360 billion in two-way trade, which has weighed on their manufacturing sectors and shaken global financial markets.

US Trade Representative Robert Lighthizer and Treasury Secretary Steven Mnuchin are meeting with China's top economic czar Liu He, seeking to build on progress made in Washington last month.

We are "looking forward to discussions today", Mnuchin said as he left his hotel Thursday morning for the talks.

Expectations for a trade deal have grown as China faces pressure from slowing economic growth, and as swooning global markets pose a challenge to Trump and his economic advisors.

Data released on Thursday in China showed its trade surplus with the US -- a major source of anger within the Trump administration -- narrowed in January to USD 27.3 billion, even as its American imports plunged 41 per cent for the month from a year earlier.

Chinese President Xi Jinping plans to meet with the US officials in Beijing this week, a report in the South China Morning Post said Wednesday, bolstering hopes for the talks and world markets.

Trump also has said he expects to meet with Xi "at some point" to clinch a trade deal.

Trump told reporters in the Oval Office on Wednesday that preliminary talks in Beijing were "going along very well," Bloomberg reported.

"They're showing us tremendous respect," he added.

"Markets will continue to watch -- and react -- closely to the ups and downs of the negotiations," said Trey McArver of Trivium Research.

"But Sino-US relations are all about the two leaders, and it will ultimately be up to Xi and Trump to come to a deal -- or not," he wrote Wednesday in a newsletter.

The two sides said major progress was made in talks last month in Washington, but a wide gulf remains on some issues.

The US is demanding far-reaching changes to Chinese practices that it says are unfair, including theft of US technology and intellectual property, and myriad barriers that foreign companies face in the Chinese domestic market.

Beijing has offered to boost its purchases of US goods but is widely expected to resist calls for major changes to its industrial policies such as slashing government subsidies.