A musical version of the Ramayana was one of key performances at the ceremony reflecting India's cultural linkages with several member countries. 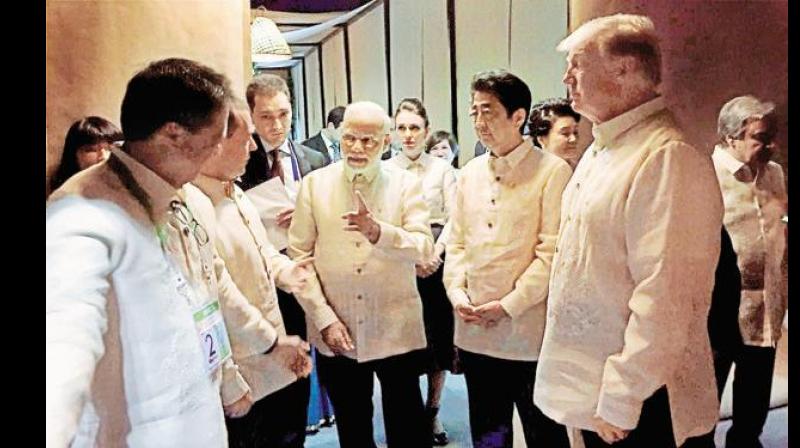 The ASEAN leaders later began deliberations at the summit which is taking place under the shadow of China's growing military build-up in the resource-rich South China Sea. (Photo: PTI)

Manila: A musical version of the epic Ramayana was one of key attractions at the grand opening ceremony of the two-day-long ASEAN summit in Manila on Monday, reflecting India's cultural linkages with the Philippines and several member countries of the 10-member bloc.

The Ramayana performance was presented by ballet company Rama Hari and it drew loud applause from the audience.

The Ramayana in the Philippines is called 'Maharadia Lawana' which means king Ravana. The Philippines' famous dance 'Singkil' is based on the Ramayana.

The ASEAN leaders later began deliberations at the summit which is taking place under the shadow of China's growing military build-up in the resource-rich South China Sea.

China claims sovereignty over all of the South China Sea, a huge source of hydrocarbons. However, several ASEAN member countries including Vietnam, the Philippines and Brunei have counter claims.

India has been supporting freedom of navigation and access to resources in the South China Sea in accordance with principles of international law, including the 1982 UN Convention on the Law of the Sea.

The ASEAN have been pushing for a legally binding code of conduct for all stakeholders in the South China sea but Beijing has been opposing such a framework asserting that it will resolve the dispute with respective countries under bilateral mechanism.

Prime Minister Modi will attend the ASEAN-India summit on Tuesday.