Modi and Trump are understood to have also discussed the security scenario in the Indo-Pacific region. 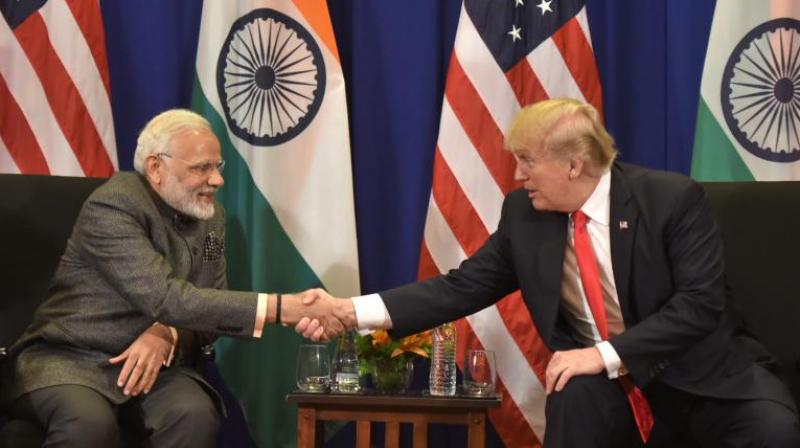 Manila: The ties between India and the United States are growing, said Prime Minister Narendra Modi after holding a bilateral talk with US President Donald Trump on the sidelines of ASEAN Summit in Philippines on Monday.

"Our (India-US) relations go beyond, we are working for future interests of Asia and humanity," Modi said in Manila.

"It's an honour to meet you again," Trump told Modi.

Both the leaders also discussed a range of key issues, including defence and security.

The meeting in the Philippines capital came a day after officials of India, the US, Japan and Australia held talks to give shape to the much talked-about quadrilateral alliance to keep the strategically important Indo-Pacific region free, open and inclusive.

Modi and Trump are understood to have discussed the security scenario in the Indo-Pacific region besides several other issues of mutual interests, including ways to further boost bilateral trade.

The move to set up the quadrilateral alliance comes in the backdrop of growing Chinese assertiveness in the South China Sea. The US has been favouring a larger role for India in the strategically important Indo-Pacific region.

The use of the term "Indo-Pacific" by President Trump has led to speculation that it may have something to do with Washington preparing the ground for a revival of the so called quadrilateral strategic alliance between the US, Japan, Australia and India to counter China's rise.

Trump on Saturday praised India's "astounding" growth after it opened up its economy and also lauded Modi, saying he has been working successfully to bring the vast country and its people together.

Speaking at a gathering of CEOs on the sidelines of the annual Asia-Pacific Economic Cooperation (APEC) summit in the Vietnamese city of Danang, President Trump had cited India as one of the countries in the Indo-Pacific region making strides.

He praised India as a sovereign democracy with a population of over 1 billion as well as the largest democracy in the world.

It was the fourth meeting between Modi and Trump this year.

They earlier met when Modi visited the US and next, at the G20 Economic Summit.

Reportedly, the two leaders did not share a hug this time, unlike their earlier meetings.

Earlier on Monday, President Duterte and his wife Honeylet Avancena welcomed the world leaders at the opening ceremony of 31st ASEAN Summit in Manila.

Modi also arrived there and shook hands with President Duterte.

Among the highlights of the opening ceremony was a music and dance excerpt from the musical Rama Hari, based on the characters of the Ramayana, an epic narrative that is a shared heritage among the ASEAN member states.

Modi later visited the International Rice Research Institute in Los Banos, Philippines, earlier in the day, and inaugurated the Resilient Rice Field Laboratory, named after him.

He will also meet the members of the Indian community at a reception to be hosted by the Indian envoy in Philippines.