Trump said the United States was ready to make a bilateral deal only on the basis of ‘mutual respect and mutual benefit.’ 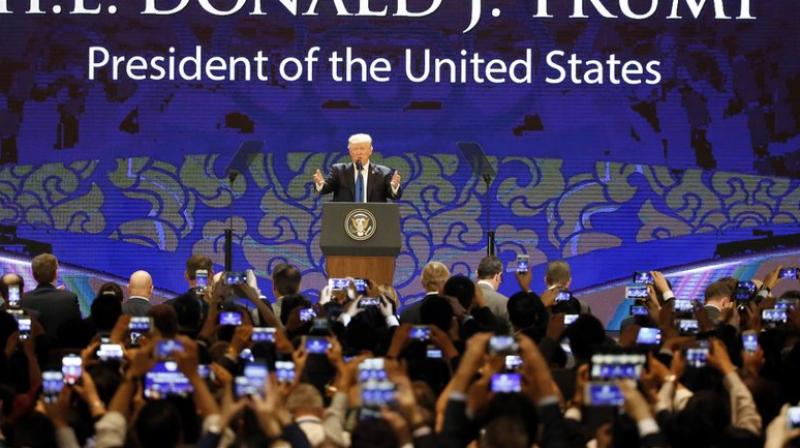 Although he was addressing a meeting alongside the summit of Asia-Pacific leaders, Trump repeatedly referred to the Indo-Pacific region and mentioned the importance of India in his speech. (Photo: AP)

Danang: US President Donald Trump set out a strong message on trade at a meeting of Asia-Pacific countries in Vietnam on Friday, saying the United States could no longer tolerate chronic trade abuses and would insist on fair and equal policies.

Trump said the United States was ready to make a bilateral deal with any country in the Indo-Pacific region, but only on the basis of "mutual respect and mutual benefit".

"When the United States enters into a trading relationship with other countries or other peoples, we will from now on expect that our partners will faithfully follow the rules," he said in the seaside resort of Danang.

"We expect that markets will be open to an equal degree on both sides and that private investment, not government planners, will direct investment," he said in a speech ahead of a summit of Asia-Pacific Economic Cooperation (APEC) leaders.

Trump arrived in Vietnam from China on the fourth leg of a 12-day trip to Asia. Redressing the balance of trade between Asia and the United States is at the centre of Trump's "America First" policy he says will protect US workers.

The difference between Trump's and China's approaches was made more stark by comments in a later speech from Chinese President Xi Jinping, who said globalisation was an irreversible trend and voiced support for multilateral trade deals.

While China has by far the biggest trade surplus with the United States, Vietnam is also on the list of those surpluses the Trump administration seeks to reduce.

APEC, which has long championed free trade, has itself been convulsed by the changes under Trump.

Since Trump abandoned the Trans Pacific Partnership (TPP) trade deal early in his presidency, the remaining 11 members have struggled to build momentum to keep it alive.

Leaders of TPP countries are due to meet on Friday after talks among ministers ended in confusion on Thursday with Japan's economy minister saying that they "agree in principle" and his Canadian counterpart saying that was not true.

Trump broke early with the "Pivot to Asia" of the Obama administration, worrying some traditional allies that he would allow China to extend its increasing dominance.

Danang itself sits on the shore of the South China Sea, one of the region's biggest security headaches and where China's neighbours challenge its sweeping claim to most of the waterway as having no basis in law.

Trump said the region's future depended on upholding "freedom of navigation and overflight, including open shipping lanes". He also mentioned "territorial expansion" among evils such as drugs, people smuggling and terrorism.

Vietnam has become one of the most vocal critics of China's claims in the South China Sea and its construction of artificial islands.

In a sign of possible competition with China's grand Belt and Road plan, Trump said he would push the World Bank and Asian Development Bank to fund infrastructure development and would reform US development finance institutions.

Trump said that would "provide strong alternatives to state directed initiatives that come with many strings attached".

"Above all, we seek friendship and we don't dream of domination," he said.

Although he was addressing a meeting alongside the summit of Asia-Pacific leaders, Trump repeatedly referred to the Indo-Pacific region and mentioned the importance of India in his speech.

Danang has a special place in US-Vietnamese history: it was where the first US ground troops disembarked in 1965 in the escalation of a war that would last another decade before the communist victory.

Danang was close to some of the heaviest fighting and its air base was the route through which many Americans of Trump's generation were sent to the war.

Trump himself did not serve, receiving five deferments - one for bone spurs in his heel.