The South, which hosts US 28,500 troops on its soil to defend it from the North, is banned from building its own nuclear weapons. 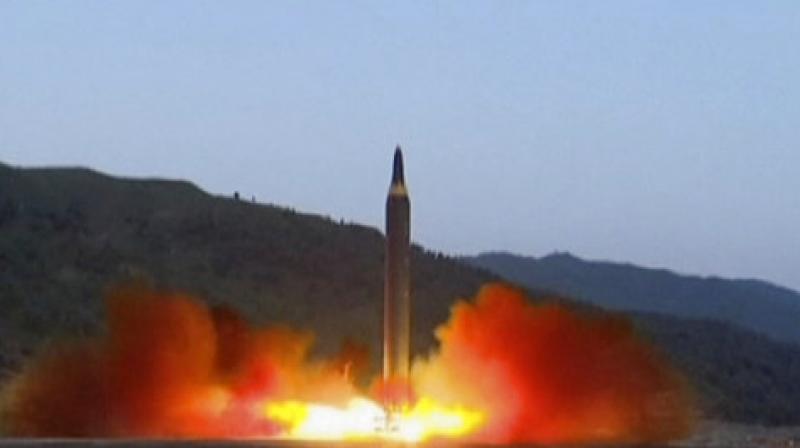 Pyongyang carried out its first nuclear test in 2006, and formally abandoned the deal in 2009. (Photo: Representational/ File)

Seoul: As nuclear-armed North Korea's missile stand-off with the US escalates, calls are mounting in the South for Seoul to build nuclear weapons of its own to defend itself which would complicate the situation even further.

The South, which hosts US 28,500 troops on its soil to defend it from the North, is banned from building its own nuclear weapons under an atomic energy deal it signed in 1974 with the US its security guarantor that instead offers Seoul a "nuclear umbrella" against potential attacks.

But with Pyongyang regularly threatening to turn Seoul into a "sea of flames" and nagging questions over Washington's willingness to defend it if doing so put its own cities in danger of retaliatory attacks the South's media are leading calls for a change of tack.

South Korea, which fought a war with the North that ended in a stalemate in 1953, is highly technologically advanced and analysts estimate it could develop an atomic device within months of deciding to do so.

"Now is time to start reviewing nuclear armament," the Korea Herald said in an editorial Friday. After Pyongyang conducted two successful tests of an intercontinental ballistic missile last month, putting much of the mainland United States within reach, the paper warned: "Trust in the nuclear umbrella the US provides to the South can be shaken." It urged Washington to deploy some of its atomic weapons to South Korea if it did not want to see a nuclear-armed Seoul.

The US stationed some of its atomic weapons in the South following the 1950-53 Korean War, but withdrew them in 1991 when two Koreas jointly declared they would make the peninsula nuclear-free.

But Pyongyang carried out its first nuclear test in 2006, and formally abandoned the deal in 2009. Tensions have soared in recent months with US President Donald Trump this week warning of "fire and fury" against Pyongyang, which threatened missile strikes near the US territory of Guam.

The North's military chief Ri Myong Su responded saying that if the US continued in its "reckless" behaviour, Pyongyang would "inflict the most miserable and merciless punishment upon all the provokers".

The latest war of words between Trump and the North ruled by young leader Kim Jong-Un unnerved many in the South, even though it has become largely used to hostile rhetoric from its neighbour.

A conflict between the North and the US could have devastating consequences for Asia's fourth-largest economy, with Seoul within range of Pyongyang's vast conventional artillery forces. "A catastrophe is looming," the South's top-selling Chosun daily said in an editorial this week. "All options, even those considered unthinkable so far, must be on the table."

In all the North has staged five atomic tests including three under Kim as it seeks to develop a nuclear-tipped missile capable of hitting the continental US. A survey last year even before tensions began to mount showed about 57 percent of South Koreans already supported the idea of nuclear armament, with 31 percent opposing it.

"We need to have our own military options to overwhelm the North," the Korea Economic Daily said in an editorial this week, calling for a nuclear weapon to ensure a "balance of terror" and prevent Pyongyang from attacking the South.

But a South Korean bomb would infuriate Pyongyang, which says it needs nuclear weapons to defend itself against the threat of invasion, and make bringing it to the negotiating table even harder.

Seoul's defence chief Song Young-Moo said recently the South was "fully capable" of building its own nuclear weapon but was not considering the option for now.

Atomic arms are not the only way Seoul can step up its defences. Song is pushing for the development of nuclear-powered submarines, although doing so also requires consent from the US.

South Korean President Moon Jae-In has also urged limits on Seoul's missiles to be increased in a conversation with Trump. At present, Seoul is allowed to possess ballistic missiles with a range of 800 kilometres and payload of 500 kilogrammes.

It wants the weight limit raised to 1,000 kilogrammes, and the Pentagon said Monday it was "actively" considering the revision.