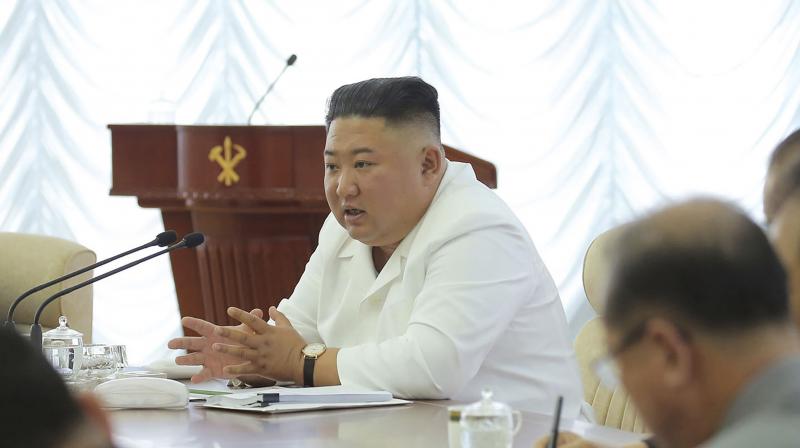 In this photo provided by the North Korean government, North Korean leader Kim Jong Un, rear center, attends a meeting of the Politburo of the Central Committee of the Workers' Party of Korea in North Korea. (AP)

Seoul: North Korea said on Thursday the United States has no standing to comment on inter-Korean affairs, and it is in Washington’s interest to stay quiet if it wants the upcoming presidential election to go smoothly, state media reported.

The statement comes after the U.S. State Department said it was disappointed at North Korea for suspending communication hotlines with South Korea on Tuesday.

“If the U.S. pokes its nose into others’ affairs with careless remarks, far from minding its internal affairs, at a time when its political situation is in the worst-ever confusion, it may encounter an unpleasant thing hard to deal with,” Kwon Jong Gun, director-general for U.S. affairs at North Korea’s Foreign Ministry, said in comments carried by state news agency KCNA.

The United States should “hold its tongue” and address its own domestic problems unless it wants to “experience a hair-raiser,” he said.

“It would be good not only for the U.S. interests but also for the easy holding of upcoming presidential election.”

It is unclear what North Korea would do to disrupt the election or cause problems for U.S. President Donald Trump’s re-election campaign, said James Kim, a research fellow at the Asan Institute for Policy Studies in Seoul.

“If anything, there’s a chance that provocation may even rally the country around the incumbent,” he said.

After a series of historic summits in 2018 and 2019 between Trump and North Korean leader Kim Jong Un, little progress has been made in dismantling the North’s nuclear weapons programme, and Pyongyang has expressed increasing frustration with Washington’s refusal to ease sanctions.

North Korea said on Tuesday it would sever hotlines with South Korea after days of lashing out at Seoul for not stopping defectors from sending leaflets and other material into the North.

On Wednesday, South Korea said it would take legal action against two organisations that conduct such operations.