Kishida had been chosen by the Liberal Democrats as a safe, conservative choice a month ago 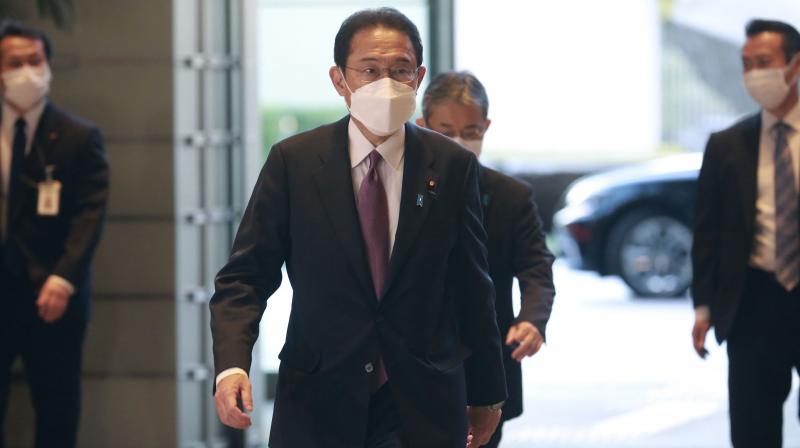 Tokyo: Fumio Kishida was reelected as Japan's prime minister on Wednesday after his governing party scored a major victory in key parliamentary elections.

Elected just over a month ago by parliament, Kishida called a quick election in which his governing party secured 261 seats in the 465-member lower house  the more powerful of Japan's two-chamber legislature  enough to maintain a free hand in pushing legislation through parliament.

The October 31 victory increases his grip on power and is seen as a mandate from voters for his weeks-old government to tackle the pandemic-battered economy, virus measures and other challenges. Kishida said he saw the results as a signal that voters chose stability over change.

Later Wednesday, he will form his second Cabinet by keeping all but one of the ministers he appointed when he took office on Oct. 4, and then map out his economic measures and other key policies at a news conference.

Kishida had been chosen by the Liberal Democrats as a safe, conservative choice a month ago. They had feared heavy election losses if the unpopular Yoshihide Suga had stayed in power. Suga resigned after only a year in office as his popularity plunged over criticism of his handling of the coronavirus pandemic and his insistence on holding the Tokyo Olympics despite concerns of a virus surge.

Kishida's grip on power also may be strengthened by his Cabinet changes.

A key policy expert from his party faction, former Education Minister Yoshimasa Hayashi, will be the new Foreign Minister, while former Foreign Minister Toshimitsu Motegi will shift to the governing party's No. 2 post.

Motegi voted for Kishida in the party leadership race and will replace party heavyweight Akira Amari, who resigned from the post over his unimpressive election outcome due to his past bribery scandal.

Though many of Kishida's ministers are first-timers, key posts went to those from influential and party wings, including those led by ultra-conservative former Prime Minister Shinzo Abe and former Finance Minister Taro Aso.

Kishida promises to create a reinforcing cycle of growth and improved economic distribution to raise incomes under his new capitalism economic policy.

Kishida's immediate post-election task is to compile a major economic stimulus package of about 30 trillion yen ($265 billion) that includes cash payouts, to be announced next week. He also aims to pass an extra budget by the end of this year to fund the projects.

At a government meeting Tuesday, Kishida renewed his pledge to create a positive cycle of growth-distribution by bolstering investment and income.

Kishida is also expected to outline later this week his pandemic measures ahead of another possible surge in cases, which could affect his support ratings.

As a former foreign minister, Kishida will continue to prioritise the Japan-U.S. security alliance and promote a vision of a free and open Indo-Pacific with other democracies, including Quad dialogue members the U.S., Australia and India.

Kishida has stressed the importance of a stronger military amid worries over China's growing power and influence and North Korea's missile and nuclear threats.

He has opposed changes to a law that requires married couples to adopt a single surname, which forces most women to abandon their maiden names. The Liberal Democrats are widely seen as opposed to gender equality and diversity.