The US president also used his speech at the APEC business meet to promote his vision for a free and open Indo- Pacific region. 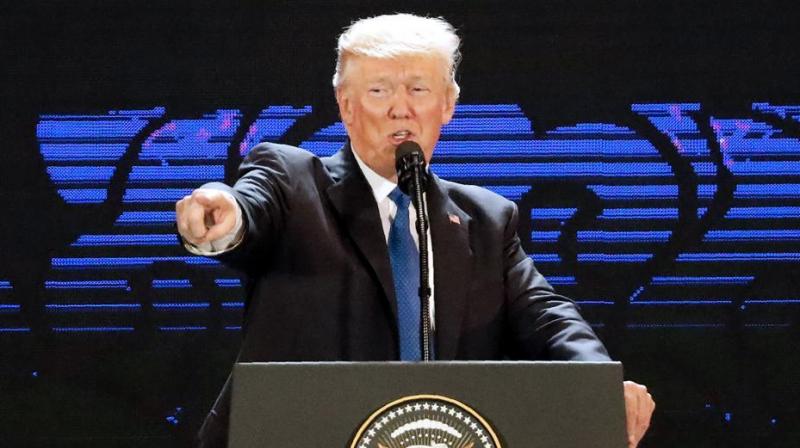 He pointed out that India was celebrating the 70th anniversary of its Independence and highlighted that the country was a sovereign democracy with a population of 1.3 billion as well as the largest democracy in the world. (Photo: AP)

Danang (Vietnam): US President Donald Trump praised India’s “astounding” growth on Friday after it opened its economy and also lauded Prime Minister Narendra Modi, saying he has been working successfully to bring the vast country and its people together.

At a gathering of CEOs on the sidelines of the annual Asia-Pacific Economic Cooperation (APEC) summit in Danang in Vietnam, Trump said countries outside of the grouping were also making “great strides in this new chapter for the Indo-Pacific”.

He pointed out that India was celebrating the 70th anniversary of its Independence and highlighted that the country was a sovereign democracy with a population of 1.3 billion as well as the largest democracy in the world.

“Since India opened its economy, it has achieved astounding growth and a new world of opportunities for its expanding middle class,” Trump said.

“And Prime Minister (Narendra) Modi has been working to bring that vast country and all of its people as one. And he has been working at it very successfully indeed,” the US President said.

Prime Minister Modi is leaving for the Philippines on Sunday to attend the India-ASEAN and East Asia summits. Trump is also scheduled to attend the East Asia Summit, a key meeting between ASEAN and eight of its partners.

The US president also used his speech at the APEC business meet to promote his vision for a free and open Indo- Pacific region.

“We have been friends, partners and allies in the Indo- Pacific for a long, long time,” he said.

“The story of this region in recent decades is the story of what is possible when people take ownership of their future.”

The use of the term Indo-Pacific by President Trump has led to speculation that it may have something to do with Washington preparing the ground for a revival of the so-called Quadrilateral strategic alliance between the US, Japan, Australia and India to counter China’s rise.

China has already reacted cautiously over a proposal by the Trump administration for a working-level quadrilateral meeting with India, Japan and Australia, saying Beijing hopes that it would not target or damage a “third party’s interest”.

In his address, Trump also praised countries like Indonesia, Thailand, the Philippines, Malaysia and Japan, which also briefly touched on the bloody history of the Vietnam war, in which Danang was a key battlefield.

“Today we are no longer enemies, we are friends,” Trump said.