'We had anticipated US side would come with constructive idea, thinking we would take something in return,' North Korean spokesperson said. 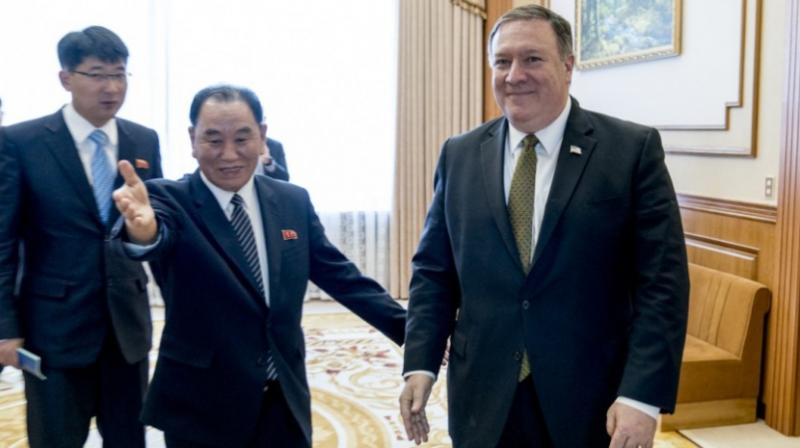 Seoul: North Korea said on Saturday its resolve to give up its nuclear programmes may falter after talks with the United States in Pyongyang, contradicting Secretary of State Mike Pompeo who lauded progress made on nearly all key issues.

Pompeo had a day and a half of talks in Pyongyang, seeking to hammer out details on how to dismantle North Korea's nuclear programmes, such as a timeline to denuclearisation and a plan on declaring its related facilities.

But the result of the negotiations was "extremely troubling," a North Korean foreign ministry spokesperson said in a statement carried by the official KCNA news agency, accusing Pompeo's delegation of insisting on unilateral complete, verifiable and irreversible denuclearisation (CVID).

"We had anticipated the US side would come with a constructive idea, thinking we would take something in return," the North Korean spokesperson said.

"But through the high-level talks, the trust between the DPRK and the United States is facing a dangerous situation where our resolve for denuclearisation, which has been firm and steadfast, may falter."

The "fastest way" to achieve a nuclear-free Korean peninsula was through a phased approach under which both sides took steps at the same time, the spokesperson said.

There was no immediate comment from the State Department.

As Pompeo departed Pyongyang, he said he had made progress "on almost all of the central issues" in the talks, including on setting a timeline for its denuclearisation, though more work remained to be done.

Pompeo said the two sides agreed to hold discussions on July 12 on the repatriation of remains of Americans killed in the 1950-53 Korean War, and also discussed "modalities" for the destruction of a missile engine testing facility.

Pompeo said he spent "a good deal of time" discussing a denuclearisation timeline and the declaration of the North's nuclear and missile facilities.

"I think we made progress in every element of our discussions," he said, according to a pool report from US reporters who accompanied him to Pyongyang.

"These are complicated issues but we made progress on almost all of the central issues. Some places a great deal of progress, other places there's still more work to be done," he said.

US State Department spokeswoman Heather Nauert said Pompeo did not meet North Korean leader Kim Jong Un as he had done on his two previous visits to North Korea this year, but handed over a letter to him from US President Donald Trump.

A letter from Kim to Trump was also delivered to Pompeo through Kim Yong Chol, a top North Korean party official and former spy agency chief, who was Pompeo's interlocutor and played a key role together in arranging an unprecedented summit between Trump and Kim in Singapore on June 12.

Asked about reports based on US intelligence assessments that North Korea had continued to develop its nuclear facilities even while engaging in dialogue, Pompeo said:

"We talked about what the North Koreans are continuing to do and how it's the case that we can get our arms around achieving what Chairman Kim and President Trump both agreed to, which is the complete denuclearisation of North Korea. There is no - no one walked away from that, they're still equally committed, Chairman Kim is ... still committed," he said.

Nauert said the July 12 meeting, which Pompeo said would take place at the intra-Korean border, would be at working level and involve US Defence Department officials.

Pompeo reiterated that Trump was "committed to a brighter future for North Korea".