Trump, at the start of a 12-day Asian trip, is looking to present a united front with Japan against North Korea. 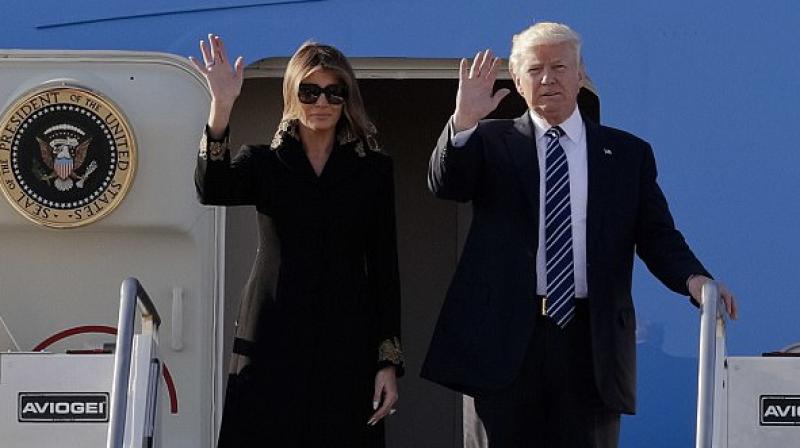 North Korea's recent actions, including several missiles that overflew Japan and Pyongyang's sixth and largest nuclear test, have raised the stakes in the most critical international challenge of Trump's presidency. (Photo: AP)

Yokota Air Base: US President Donald Trump arrived in Japan on Sunday defending his tough rhetoric on North Korea, saying discussions on Pyongyang will figure prominently in talks with other Asian leaders as tensions rise over its missile and nuclear tests.

Trump, at the start of a 12-day Asian trip, is looking to present a united front with Japan against North Korea through meetings with Prime Minister Shinzo Abe amid heightened tensions over Pyongyang's nuclear and missile tests.

Speaking to reporters aboard Air Force One en route to Asia, Trump said a decision would be made soon on whether to add the reclusive state to a list of state sponsors of terrorism.

His administration also planned to take a different approach to dealing with the issue after years of what he termed "total weakness".

"And there's been 25 years of total weakness and so we're taking a very much different approach," Trump said, without giving any details.

Trump has rattled some allies with his vow to "totally destroy" North Korea if it threatens the United States and his dismissal of North Korean leader Kim Jong Un as a "rocket man" on a suicide mission.

North Korea's recent actions, including several missiles that overflew Japan and Pyongyang's sixth and largest nuclear test, have raised the stakes in the most critical international challenge of Trump's presidency.

Trump also said he plans to meet Russian President Vladimir Putin during his trip, the longest Asian tour by any US leader since George H.W. Bush in 1992.

"I think it's expected that we will meet," he said. "We want Putin's help on North Korea."

Trump will seek a united front with the leaders of Japan and South Korea against North Korea before visiting Beijing to make the case to Chinese President Xi Jinping that he should do more to rein in Pyongyang.