Mashal Khan, 23, was stripped, beaten, shot before being thrown from the 2nd floor of his hostel at the Abdul Wali Khan University in April. 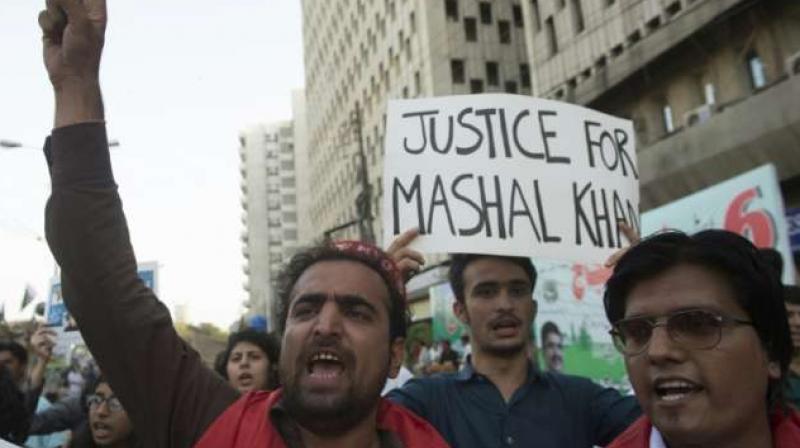 The killing of Pakistani student, Mashal Khan, led to a national outcry after a video of the incident went viral. (Photo: AFP/File)

Peshawar: An outspoken Pakistani student killed by a lynch mob was falsely accused of blasphemy, according to an official report that added his murder was organised by faculty members and rival students.

Mashal Khan, 23, was stripped, beaten and shot before being thrown from the second floor of his hostel at the Abdul Wali Khan University in northwest Mardan in April.

The killing led to a national outcry after a video of it went viral.

The country's top court ordered the formation of a Joint Investigation Team comprising police and intelligence agencies, which is set to submit its findings this week.

"No direct or indirect evidence supporting blasphemy allegations against Mashal Khan (or his friends) Abdullah and Zubair was received," the 308-page report, a copy of which was seen by source, said.

It added the killing was instigated by members of Khan's own secular Pakhtun Students Federation, who felt threatened by his growing prominence as a critic of rising fees and alleged corruption at the university, as well as the institution's staff.

Mashal's father, Muhammad Iqbal, said on Monday that the findings had vindicated his son.

"This proves my son was not a blasphemer," he said, calling for the suspects to be tried by a military court.

Blasphemy is a hugely sensitive charge in conservative Muslim Pakistan, and can carry death penalty. Even unproven allegations can cause mob lynching and violence.

Last month a 10-year old boy was killed and five others were wounded when a mob attacked a police station in an attempt to lynch a Hindu man charged with blasphemy for allegedly posting an incendiary image on social media.

At least 65 people have been murdered by vigilantes over blasphemy allegations since 1990.