‘The world will never advocate for Pakistan at the cost of affecting their relationship with India,’ the boy said. 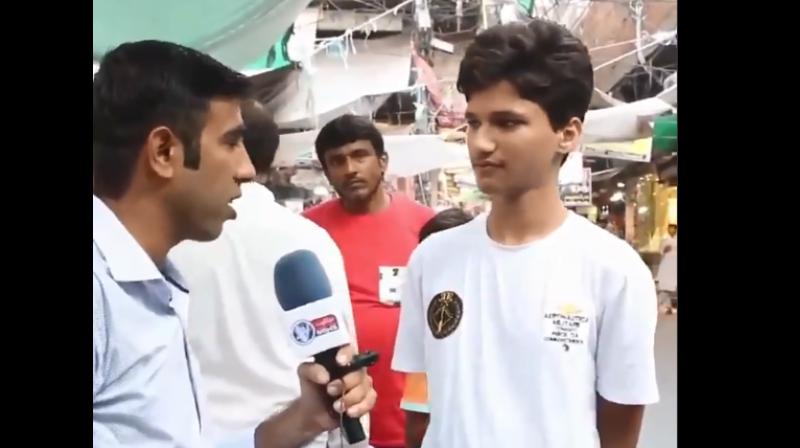 The boy said that Pakistan cannot solve the Kashmir issue unless it is able to match India’s economic strength in order to be taken seriously globally. (Photo: Twitter | video screengrab)

Islamabad: While Pakistan Prime Minister Imran Khan is on his quest to raise the Kashmir issue on global platforms, people in his country seem to have a different opinion on the matter. Here’s a video that has been going viral for a while now showing a young Pakistani boy in which he opines that Islamabad should first focus on its economy and then focus on issues on matters such as Kashmir.

The boy said that Pakistan cannot solve the Kashmir issue unless it is able to match India’s economic strength in order to be taken seriously globally. Reacting to a question on government-called “Kashmir solidarity hour”, the boy said issues like Kashmir, Balochistan and (Federally Administered Tribal Areas) FATA can only be resolved after the nation improves its economy and solidifies its position in the international fraternity.

"On matters of Pakistan and Kashmir, different countries of the world have trade compulsions with India. India is lobbying around the world and making itself heard. Till the time, Pakistan improves its economy and matches its heft with India, we (Pakistan) cannot make our issues stand globally. Kashmir issue will not be solved till the time Pakistan doesn't defeat India economically," the boy said, reported by Times Now.

"The world will never advocate for Pakistan at the cost of affecting their relationship with India...It would be better to focus on our (Pakistan) economy which will solve all the issues including Kashmir, Balochistan and FATA." he added.

He was being interviewed by a local news channel for his views on Pakistan PM Imran Khan’s call to citizens to come out in solidarity with the people of Jammu & Kashmir.

Imran Khan even led demonstrations last Friday (August 30) as sirens rang out across the country followed by broadcasts of Pakistani and Kashmir national anthem and traffic came to a halt for several minutes in solidarity with Kashmiris. Thousands of people gathered at the Constitution Avenue where Imran Khan addressed the nation and vowed to continue the fight until Kashmir is “liberated”.

Ever since India abrogated Article 370 of the Constitution, scrapping the special status accorded to the restive northern state, Pakistan has been on a diplomatic war path raising the matter on many global forums. Pakistan has raised the matter on United Nations Security Council (UNSC), European Union, Organisation of Islamic Countries (OIC) and with countries such as US, China and UK.

As Pakistan’s economy continues to suffer despite several bailouts from the IMF and its allies such as China and Saudi Arabia, the country’s population is growing increasingly disillusioned with its leadership’s fixation on Kashmir.