Being Muslim in Trump’s America

The social media outlets have tainted the culture and religion of Islam to its utmost bare minimum of acceptance. 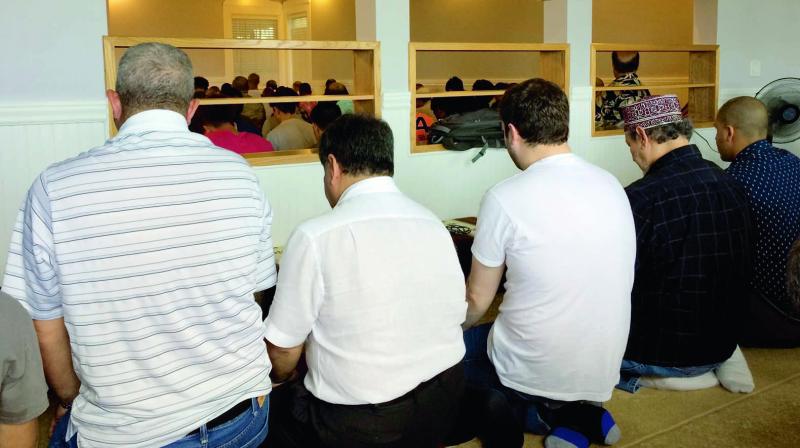 In this photo taken on March 10, men gather for afternoon prayers at the Muslim Association of Hawaii in Honolulu. (Photo: AP)

Much has been said, discussed and spoken about Muslims and Islamophobia during the United States presidential election in the late 2016. Many people called for a ban on immigrant Muslims coming to United States but nobody was talking about the Muslims and their loyalty for their country who are already residing in the United States for many years. Nobody talks about their meaningful contribution in nation-building and making America as one of the greatest nation on the globe. We all know Islam in the West has a derogatory image and understanding. The social media outlets have tainted the culture and religion of Islam to its utmost bare minimum of acceptance. The only thing that can be done now is to stand our ground and represent Islam in a positive light. We are individuals representing our lineage and letting people know we are normal human beings like them with similar dreams and hopes to live in peace and happiness. We might have unique names pronounced differently, or have different hues of skin tone, but at the end of the day we all have similar ideals.

In Darwinian terms of “survival of the fittest” as a Muslim in the United States or any other Western country is a unique and individualistic life journey and experience.  “Grown up in Southern California, I had already realised I was different from all the rest of the students in my school and community. The value, respect, obedience, and self-control of righteous deeds were a test each day. As a female Muslim, I did not wear a hijab to distinguish myself from others. However, I had noticed in high school that females who wore the hijab were frowned upon and some students displayed a negative form of mockery of their religious and cultural appearance in public. After noticing such behaviour, I realised being a Muslim or a female Muslim in a Western country was an arduous task for survival”, said Fayama one of my students, graduated from University of California at Berkeley.

In my teaching career in the United States during the last 14 years, I noticed an abundant amount of females wearing hijabs unlike in high school.  The university environment seemed to be more diverse and even had a Muslim Students Association (MSA) on campus.  The MSA had monthly meeting, social gatherings, fundraised for charity, Ramzan events for the holy month and even placed importance on borrowing rooms on campus for daily prayers and also organized a venue for Id holiday prayer(s) near or on campus grounds. MSAs have been able to serve two important functions; one external and the other internal. Externally, the organisation of panels and lectures that allow campus members to learn about the religion from an academic point of view and ask questions can truly go a long way to dispel many of the inaccurate stereotypes of Islam and Muslims. Perhaps just as important, however, is the internal role that the MSAs play in serving the Muslim community on campus. This includes allowing for prayer rooms on campus, religious lectures, and the development of a strong community on campus. Practising the Five Pillars of Islam is a complete challenge for many young Muslims living in a Western country with diverse opinions and perspective of Islam.

“My experience as a Muslim in American universities has not been that much different than that of other students in most ways. I had to study, live away from family, and develop new approaches to thinking about the world. I had to work to make new friends, understand what inspired me, and continuously evaluate where I would be when I graduate”, said one of my students who is practising law in Los Angles. But then again, it has been extremely different. It’s not always easy trying to be an observant Muslim in society where your religion is widely excoriated from everything to being a fundamentalist violent ideology to a close-minded system of laws that have unseemly consequences. It doesn’t help that you are also trying to figure out your own approach to religion during that critical time.

This parallel state of mind is a very typical experience for the Muslim in an American university setting. Very few non-Muslim students will actually have the interest or energy to actually find out or ask you about your faith. Indeed, in the great American notion of politeness, it is not considered good form to do so. In that vein, what is ironic is that most American university students aren’t actually trained or experienced in articulating the tenets and beliefs of their religion in a digestible way to other Americans.

A 22-year-old American student of India origin, Nuzhat, covering her head with a traditional scarf, said she came to University because she “wanted to get to know more about American culture and liberalism and tell them about my religion and culture”, a religion she claims is misrepresented by stereotypes in Western minds. She wants to show them that “Muslims with Islamic values and traditions can excel in the same way as other do and can be the role model for her new generation students”.

Even with MSAs, however, studying as an observant Muslim in an American university is not much different that living in America outside of the university setting. It is, like most matters, the state of the Muslim’s mind that usually dictates the experience. If the state of mind is that of a foreigner living in society that is perceived as antithetical to Muslim values, then a fruitful experience will be hard to come by. If, on the other hand, the approach is of an American who has a genuine interest in her faith and looking to enrich and contribute to society, attending an American university is just as important a rite of passage as it is for any other American.

Basically, the status of Muslims in American context is fundamentally different from that in the rest of the Muslim world. I believe, for the new generation of American Muslims, instead of denying, lying, justifying and defending wrongdoing like children, they must come forward and act like an enlightened citizen and must accept what is bad, condemn it and promote what is good and follow it.

The writer holds a doctorate in linguistics and teaches at Washington University in St. Louis, US. He can be reached at mwarsi@wustl.edu